The Special Colour Jets of the German Air Force in 2008

For their 50th Anniversary, the German Air Force painted several aircraft in highly attractive schemes. Jorg Pfeifer is here to tell us all about them. 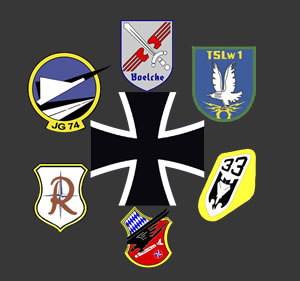 2008 was another year of special-painted aircraft in the Luftwaffe (German Air Force). Jagdbombergeschwader (Fighter Bomber Wing FBW) JaboG31, 32 and 33 celebrated their 50 year jubilee, Jagdgeschwader (Fighter Wing FW) JG74 painted a F-4F for the fly out ceremony and JG71 and the TSLw1 painted their Phantoms to celebrate 50 years of F-4 Phantom II and 35 years of F-4 in German service. Moreover the 2 orange aircraft from the WTD 61 and the Tiger Tornado from FBW 32 have been flying in special markings since 2007. Therefore in 2008 ten German jets flew in special colours.

FBW 31"Boelcke" celebrates its 50th anniversary in 2008. This wing was one of the first flying units of the Luftwaffe and for the celebration, which took place exactly 50 years later on June 20th 2008 at 11:00 o'clock a Tornado with the serial 43+65 received a special paint scheme. The concept was created by Major Heinrichs and the airbrush was done by Frank Nerstheimer and, once again, Louis du Chateau. After more than 330 hour the job was finished and a new colorbird was born. The basic colors were applied in Erding again and are inspired by the colors from the US Airfoce aggressor flying in Alaska. After that the Tornado was flown back to Nörvenich where the airbrush work was finished.

The left side of the aircraft has the lettering “Boelcke” on the forward fuselage and a portrait of the famous WWI Pilot on the intake. On the tail are all aircraft types flying with the FBW 31"Boelcke" together with the year dates they served for this squadron. At the lower end of the tail the silhouette of Cologne is visible.

The right side starts with the lettering “50 Jahre” and has the emblem of the FBW 31"Boelcke" on its intake.The tail shows Mr. Boelckes Fokker DIII with its original registration and a big Boelcke signature underneath. On both auxiliary tanks “seit 1958” (since 1958) was painted. 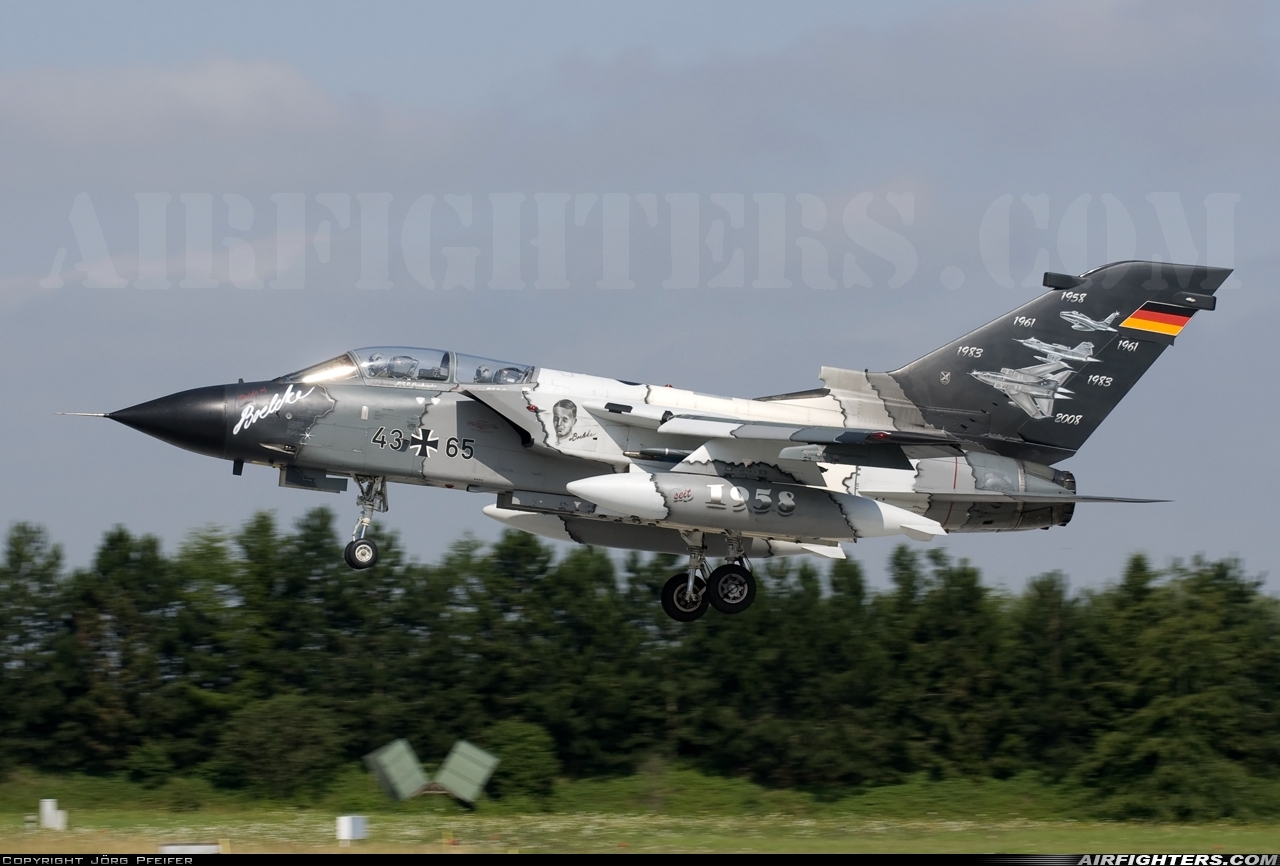 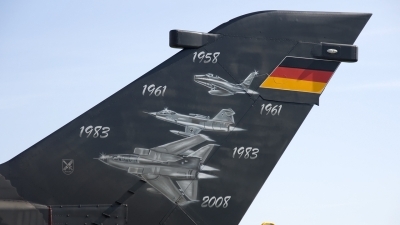 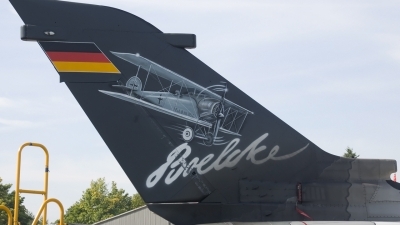 Another Squadron who celebrates its 50th anniversary in 2008 is the FBW 32 at Lechfeld. Of course this squadron painted a Tornado for this event, too. Together with the Tiger Tornado from 2007 the FBW 32 was lucky to have two specially painted aircraft in Lechfeld this year. Tornado 46+23 was the chosen one and like most of the aircraft this year it was painted in Erding. Only the airbrush design was designed and applied in Lechfeld by the local artist, Daniela Weitz. The blue color represents the color of the Bavarian sky and the silhouette of the mountains depicts the nearby Alps. On each side of the tail a banner of both squadrons, the Tigers and the Monsters stand for their professionalism. On the underside and the topside of the wings “50 Jahre JaboG 32” stands for the anniversary of this FBW. On the underside of the fuselage and on the center of the top fuselage the sun shines in the bright blue sky. The sun is covered by the emblem of FBW 32 on the underside. On the upper left wing tip the tiger logo with some tiger strips and on the upper left elevator the emblem of the flying group can be seen. On the upper right wing tip the monster logo and on the upper right elevator the emblem of the maintenance group completes this paint scheme.

The Tiger 46+48 was painted in Erding and Lechfeld and the blue-gray color should represent the motto of the 2007 Tigermeet in Orland: “Ice Tiger”. The air brusher, painted a realistic portrait of a fast approaching tiger on the left side and the tiger logo with the homepage address on the right side and of course tiger stripes all over the airframe.

On July 22nd a Tornado was transferred from Büchel to Erding to receive another fantastic paint scheme on the occasion of the 50th anniversary of FBW 33. The painting should reflect the history of the squadron and the solidarity with the region and the American partners. A contest was won by OFw Boltz and his concept was painted on the Tornado by the artist Louis de Chateau from the 25th until 28th of August in Erding After the base paintwork in grey and black has been applied to the airframe. Thereby the grey reflects the colour of the current Tornado fleet and the black stands for the colour of the shale of the region. On the forward fuselage are all aircraft types flown by the FBW 33 in the past. On the left intake is the emblem of Cochem and on the right the one from Rheinland-Pfalz. On both auxiliary tanks under the wings next the silhouette of castle Cochem the lettering “50 Jahre“and “ Team Jabo 33”can be found on the right and left. From below you can see the the emblem of the FBW 33, and the elevators are painted in a combination of a German and an American banner. The right side of the tail the illustration of the fist Squadron, the “Geister Staffel” (Ghost Wing) was perpetuated and on the left side the illustration of the second Squadron, the “Teufel Staffel” (Devils wing).

FW71 "R" at Wittmund has two special colored F-4s in 2008. 37+48 is only painted on the left side to celebrate 250.000 fh flown from FW71 "R" and 7000 fh flown on this aircraft. Later this year another number joined the left fuselage: 900.000 fh, which is the number of flight hours of all the F-4F in the German Air Force. The second one is 38+49. The base color is a dark blue and on the right side of the tail you can see a big 50 written in golden letters. This stands for the age of the weapon system F-4 Phantom II which had its first flight on May 27, 1958. On the top of this tail is a banner with the flags of all countries which still use the F-4 in their Air Force. On the left side of the tail a big golden “35” representing the number of years the F-4 has been serving in the German Air Force, and on the top there is a banner with all the emblems of the squadrons who used to fly the F-4 in the Luftwaffe. Furthermore a "Rhino" the nickname of the F-4 – is made up of the word "Phantom" on both sides of the fuselage. 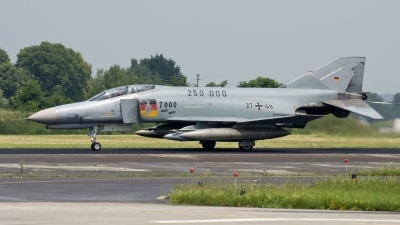 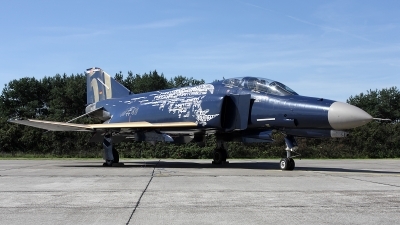 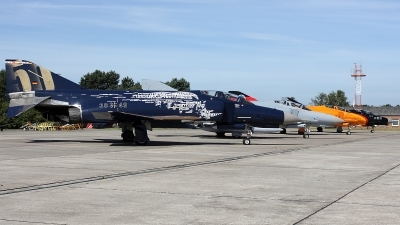 After 34 years of service with the FW 74 in Neuburg the squadron said goodbye to the F-4 in 2008 and for this event the Phantom with the serial 38+37 received a special paint scheme designed by Major Keller from the FW 74. Appropriate to this sad event, the colour was in black and grey tones. On the tail Spooky bowed to say "Thank you" to the crews for 34 years and more than 241,000 flying hours with FW 74. On each of the intakes was one emblem. On the left was the one from the 1st Squadron and on the left side the one from the 2nd Squadron. Written on the belly next to Spooky and the emblem of the FW 74 is the slogan “Phantom job well done”. The exfoliation of the colour should symbolise the aging of this weapon system. The aircraft was completely painted in Luftwaffen-Werft Erding. A few days after the Phly-Out in Neuburg the Phantom was transferred to Wittmund to serve the rest of her duty with FW71 "R" where it is still flying in these colours. 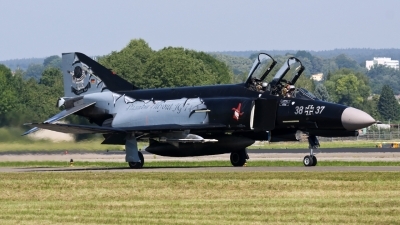 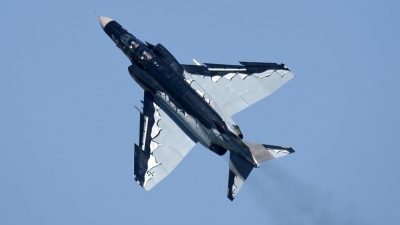 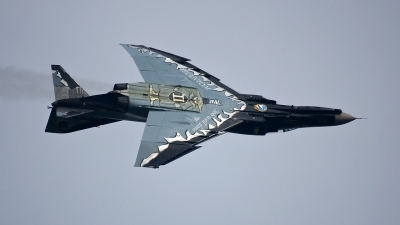 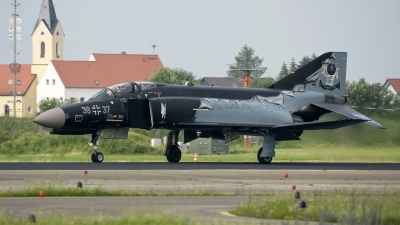 The rarest F-4F special-paint scheme of 2008 is 37+14 from the technical school of the Luftwaffe located in Kaufbeuren. It is not very colourful but it fits very well the old camouflaged aircraft that has never been repainted since its transfer flight in 1974. It was designed and painted by the staff of the TSLw. This airframe had flown only 22 hours before coming to Kaufbeuren to spend its life as an instructional airframe at the TSLw.1. I was told that it is still airworthy but it will never fly again as the Eurofighter will replace the F-4 more and more, and the days of this old lady are numbered. Let us hope that this F-4 will find her way to a museum. 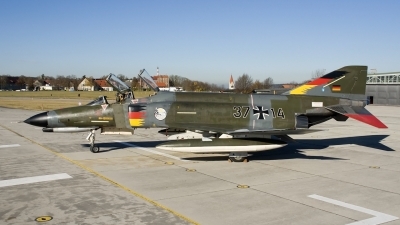 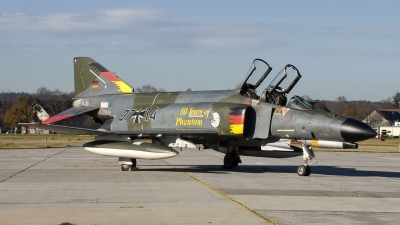 The WTD 61 in Manching used her two orange jets from the 50th anniversary in 2007 also well into 2008 so I think they deserve to be mentioned here as well.

Both of the aircraft, F-4F 37+16, and the Tornado 45+03 received their painting in Erding in the summer of 2007. The basic colour on both airframes is signal orange. Each of the jets has several aerodynamic formulas lettered on its fuselage and the slogan “50Jahre Flugerprobung” (50 years of flight testing)on the forward fuselage. Another thing they have in common is the tail which is painted in the colours of the German flag with the emblem of the WTD 61 in the middle and the elevators which are painted the same but without the emblem.. The Tornado has another emblem of the WTD 61 on the underside of the fuselage while the Phantom carries Spooky who is juggling balls of the WTD and the 50th anniversary on its belly. Additionally the F-4F has a big “50” and the word “Test” painted on the wings topside respective the upper side of the fuselage.The Tornado has the word “Test” on the upper side of its intakes. 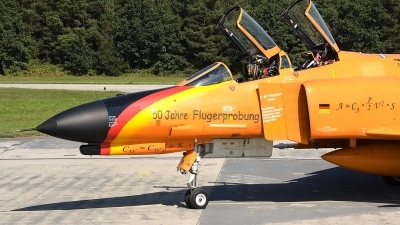 These colorful jets, especially the Phantoms, were a real treat for the thousands of spotters and photographers, and a symbol of the proud history of German Air Force.