Red Flag Alaska took place in July of 2011 and Jonathan Derden was there to cover the event and bring us some great photos. 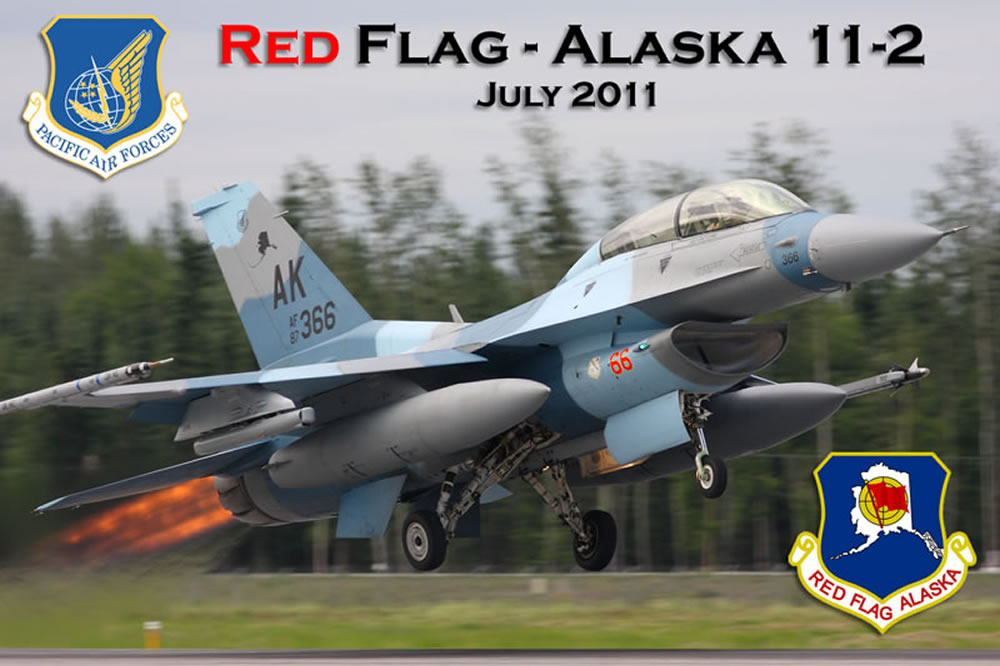 Home to more than just fishing, hunting, and stunningly beautiful landscapes, Alaska also hosts one of the largest military air exercises in the world. Known as Red Flag-Alaska (RF-A), this increasingly popular and effective exercise combines various branches of armed militaries into a fully integrated and capable force.

Red Flag-Alaska provides the United States Pacific Air Forces (PACAF) and its allies with an incredibly realistic, large-scale, multi-national and multi-service combat training exercise. Red Flag-Alaska (RF-A) provides an unparalleled training experience for large-force integration and coalition building of the various forces involved. The majority of the deployed forces stage from Eielson AFB near Fairbanks, and the remainder at Elmendorf AFB in Anchorage. Even though the forces are split between bases that are several hundred miles apart, the participants converge on the vast expanse of the Pacific Alaskan Range Complex. Yet before the exercise begins, comprehensive capabilities briefings are held to mitigate issues that may arise such as language barriers, airspace procedures, and aircraft capabilities and limitations. As Red Flag-Alaska usually involves several foreign participants, these briefings are vital for fostering not only a productive training environment, but also a safe exercise.

The goal of RF-A is to further the integration of tactics among various units and countries and to provide air crews with realistic combat training scenarios. The exercise incorporates all aspects of a strike package to include air interdiction, suppression of enemy air defenses, command and control, rescue elements, and aerial refueling. Each RF-A exercise is run by the Eielson-based 353rd Combat Training Squadron (CTS). As an integral part of the 354th Operations Group (OG), this former fighter squadron is now tasked with planning and conducting the twice-daily RF-A missions and is the exclusive controlling facility for the Pacific Alaskan Range Complex. The 353rd CTS is also able to cater to the individual training needs of the participating units, which increases the effectiveness of the exercise. In addition to the RF-A exercises, the 353rd CTS is also tasked with supporting the bi-annual Northern Edge, a multi-service exercise that combines all branches of the US military, both active duty and reserve/guard (AFRC/ANG) units. The USAF’s Pacific Alaskan Range Complex is the largest of its kind in the entire world. Consisting of approximately 66,000 square miles [108,000 sq km] of airspace, this range allows aircraft to train over a massive area of sparsely inhabited terrain larger than the US state of Georgia. Within the range itself, the 353 CTS is responsible for controlling ground-based threats such as simulated surface-to-air missile sites in order to replicate a hostile environment. This range facility in central Alaska is also over four times larger than the Nevada Test and Training Range, where the Nellis-based Red Flag exercises are held.  Although both Red Flag exercises are similar in concept, the sheer size of the Alaskan range allows for seemingly unlimited operation of aircraft and as such, gives participants unprecedented opportunities to employ their aircraft, maximizing the benefit of the exercise. An ongoing plan to further expand the range to add ground, air and sea space will result in the Joint Pacific Alaskan Range Complex (JPARC). When completed, the JPARC expansion will consist of over 100,000 sq miles [177,000 sq km] of diverse terrain uniquely suited for the Red Flag-Alaska and Northern Edge combat training exercises.

Red Flag-Alaska got its start far from Alaska in 1976 at Clark AB in the Philippines. Originally called Cope Thunder, the exercise was PACAF’s own version of then Tactical Air Command’s (now Air Combat Command, or ACC) Red Flag that began the year before at Nellis AFB. Both Cope Thunder and Red Flag were designed as a result of the lessons learned during combat missions over Vietnam during which the USAF suffered heavy losses. The exercises began with the intent to provide air crews with combat mission experience all within simulated yet realistic training scenarios, which dramatically increased the effectiveness and survivability of air crews that later operate in actual combat situations.

Cope Thunder continued to operate out of Clark AB until June 1992 when the volcanic Mount Pinatubo erupted, forcing what was thought to be a temporary move to Eielson AFB near Fairbanks. When Clark AB was closed later that same year, Eielson became the new permanent home of Cope Thunder and the 353rd CTS was subsequently tasked with providing mission support and planning training scenarios for the exercise. In March 2006, Cope Thunder became Red Flag-Alaska and the first edition of the exercise under the new title was held in the spring of that year. Despite the superficial change in nomenclature, the exercise objectives are similar to the first days of Cope Thunder. Now held up to four times each fiscal year, RF-A consistently hosts various PACAF units, as well as many NATO and other allied participants. RF-A 11-2 was held during July 2011 and included a wide variety of aircraft and weapons systems. During the course of several weeks, over a thousand airmen deployed to Eielson AFB near Fairbanks, Alaska. In addition to those at Eielson, several hundred airmen were concurrently deployed to Elmendorf AFB in Anchorage, Alaska. While the participants were predominantly USAF and PACAF, several foreign nations were present including Japan, Australia, and Singapore.

By far the most common aircraft present during 11-2 was the F-16 Fighting Falcon, with no less than four units bringing their Vipers into the fight above Alaska. While the block 30 F-16s of the Eielson-based 18th Aggressor Squadron (AGRS) provided an aerial “red air” aggressor threat, the opposing “blue” force F-16s belonged to the 79th Fighter Squadron (FS) from Shaw AFB, the 119th FS of the New Jersey ANG in Atlantic City, and the 36th FS from Osan AB. Also from Osan, the 25th FS brought A-10s for the ground attack and Close Air Support (CAS) mission. Additionally, to supplement the strike mission the Royal Australian Air Force (RAAF) and Royal Singapore Air Force (RSAF) participated with their F/A-18As and new F-15SGs, respectively. The latter aircraft belong to the 428th FS, based at Mountain Home AFB in Idaho for training RSAF crews. Aside from the fast movers, the 11-2 exercise also featured a strong airlift presence in the form of Lockheed C-130s from several different nations. Australia, and a trio each of Japanese and PACAF (Yokota AB) C-130s contributed to the airlift support mission. Each Hercules staged from Elmendorf AFB, while the tactical aircraft and tanker task force deployed to Eielson for the duration of the exercise.

The Japanese Air Self-Defense Force (JASDF) has become a regular participant at RF-A, and 11-2 was no different. Considering the proximity to Japan, the JASDF prefers to travel the relatively shorter distance to Alaska as opposed to Nellis AFB. Their assets for 11-2 included F-15Js, C-130s, KC-767s for tanker support as well as an E-767 for command and control. On the ground, the JASDF Stinger shoulder-fired missile team provided an additional realistic threat to the participating aircraft. While the list of participants and the mission scenarios continues to evolve as does the nature of the threats, Red Flag-Alaska continues to play a vital role in training not only air crews but also gives maintainers and logistics support units experience in deployment on a large scale. Despite the cultural, procedural, and tactical differences between the countries and units involved in Red Flag-Alaska, the experience gained is invaluable to the forces that train for aerial combat in the Last Frontier.

I would like to thank the following PACAF Public Affairs personnel for their support for our visit: SSgt Lara, Capt Verdyne, SrA Gross, and SrA Carbajal. I would also like to thank fellow Jetwash Images photographers Ralph Duenas and Kevin Whitehead for contributing to this article.