Marco Dijkshoorn and Frank Noort had the unique opportunity to visit the airbase for three days. 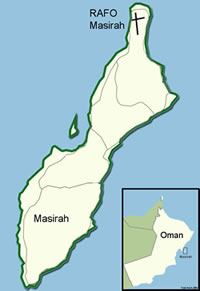 The island of Masirah is located to the East of the Arabian peninsula and lies in the Arabian Sea. It houses the Sultan Qaboos Flying Academy which trains student pilots as well as instructors for the Royal Air Force of Oman. The island is rarely visited by people from abroad. Marco Dijkshoorn and Frank Noort had the unique opportunity to visit the airbase for three days.

About the island
Masirah is Oman's largest island and Alexander the Great made it his base, referring to it as 'Serepsis'. Nowadays, dates, olives, pomegranates and mangoes are grown and the islanders' main occupations are weaving and making fishing nets. Masirah is accessed by a daily ferry service. The RAFO has a daily flight from Seeb to the air force base at Masirah, using BAC 1-11, Skyvan and Hercules aircraft to transport personnel and civilians to the island.

Masirah is only 65 km long and 15 km wide. It lies approximately 25 kilometres of the Oman coast. Not many people live on Masirah; most of these reside in the town of Ras Hilf where the ferry docks. Fishing is the principal economic activity on Masirah. Large fishing dhows moored off the southern beaches take in the catches which are shipped on to the mainland in refrigerated chests and driven to the more densely populated north of Oman.

The airbase and its squadrons
The airbase is located on the north of island, with the main runway (17/35) almost leading into the sea. The second runway, 07/25 crosses the main strip.

The British first became interested in Masirah in 1929 when they established an
un-manned staging post on the island which later expanded to an airbase that was built by the RAF during the second world war. The base remained British until 1977 after it was handed over to the Omani Air Force. In 1980 Muscat and Washington concluded a ten-year "facilities access" agreement granting the United States limited access to the air base on Masirah and other Omani mainland bases. Since 1981 there has been an ongoing program to harden and upgrade Oman's key airfields, including the construction of hardened aircraft shelters (HAS), the lengthening and strengthening of runways, and the development of extensive support facilities, ordnance depots and fuel dumps. The northern bases -- Seeb, Masirah and Khasab -- have been the primary focus of these projects. Seeb is the main transport and logistic base, collocated with the international airport, while Masirah supports air defense, strike/interdiction and training. Both bases host airborne surveillance aircraft which cover the land and sea approaches.

The Royal Air Force of Oman started to use Masirah as a training base on 2 April 1977 when 1 Squadron, which operated the BAC-167 Strikemaster during the Dhofar war, moved to the island to form the first Basic Flying Training squadron. These aircraft were the only ones used as trainers, thus lacking any elementary flight training facility on this base. On the first of January 1986, the Sultan Qaboos Air Academy on Masirah Island was inaugurated under the auspices of His Majesty the Sultan to enhance the Flight Training School and to restructure flying training. In 1985 two Scheibe SF-25C motor Gliders, to be used for initial flying training, arrived at the base. Followed two years later by the first of four AS202 Bravo trainers which were used to teach the elementary principles of flying. These aircraft were joined by PAC Mushaks in 1994. Advanced training was at first conducted on the Strikemasters but in 1999 the first of twelve Pilatus PC-9 aircraft arrived to replace them The AS202’s of 1 squadron were withdrawn as from March 2004.

On the east side of runway 17/35 where 6 squadron has its facilities things changed too. This squadron has several roles: advanced fighter training, ground attack and air defense. In 1985 negotiations started to purchase eight Panavia Tornado ADV’s but this order was canceled for financial reasons. Four Advanced Ground Attack/Reconnaissance/ Trainer Hawk 103 and 12 Air Defense single seat Hawk 203’s were purchased instead and delivered in 1993. No 6 squadron was at that moment still based at RAFO Thumrait at that time, flying Hawker Hunters but redeployed at Masirah in the summer of that year.

The third squadron to be found at Masirah is a detachment of 14 squadron with two AB205’s which are used to perform Search and Rescue tasks.

Currently the following units and aircraft are currently operating from RAFO Masirah:


At Masirah, there is also a Technical Air College which trains the technicians in the skills needed to maintain sophisticated radar and aircraft equipment, as well as numerous specialized schools. Apart from its defensive role, the RAFO helps communities in remote areas with the delivery of food and vital supplies and operates a flying doctor service.


Flight Operations
As been shown above Masirah houses two squadrons with fixed-wing aircraft and one squadron with helicopters. Days will start early at this base, this because temperatures above 40C are no exception which means that there is little going on between 13:30 and 16:00. 1 Squadron is located on west side of the base while the hangars and shelters of 6 squadron can be found to the east of runway 17/35.

A normal flying day with 1 squadron will commence with operations early in the morning, which will last until noon.You will see the first aircraft already pulled out of the hangar at 7 AM. The PC-9s are used for advanced training and do most of the flying. Numerous touch and goes are performed and the aircraft are not only used to train new pilots but also to train instructors. The striking blue camouflage lights up beautifully in the morning making the aircraft a nice subject for the camera.

In the afternoon, after a long tea break it is time for the Hawks of 6 squadron to do their part. The difference between the single seat Hawk 203 and the double seat Hawk 103 is easy to spot. Most obvious is the difference in the color scheme. While the ground attack / air defense Hawk 203’s are painted gray, the reconnaissance / trainer version Hawk 103 can be seen flying in desert camo colours. The Hawks will sometimes also fly at night.

The SAR detachment normally consists of two flights. It carries continuation training for helicopter aircrew and SAR divers from Seeb & Salalah. They mostly operate in the morning and are on standby for the rest of the day. Aircraft from the transport squadrons can also be found at Masirah on a regular basis. A daily transport flight will arrive in the morning. A normal rotating schedule would be a 1-11 on Sunday, a Skyvan on Monday and a Hercules on Tuesda. This schedule repeats itself for the rest of the week.

Conclusion
RAFO Masirah is an airbase found at a remote location and is used extensively by the Royal Air Force of Oman. The base is the backbone for the Air Force training and perfectly situated for flight operations.

Acknowledgments
The authors would like to thank the Royal Air Force of Oman for their kind hospitality. Sources used to create this article are the following:
• “Eagles”, Illustrated history of the Royal Air Force of Oman by John Clementson
• Scramble magazine, issue 299 and their website: http://scramble.nl/om.htm
• The website of global security. http://www.globalsecurity.org

More photos from the trip. >>