Exercise Initial Link 2008 was held from 11 until 22 may in that year. Although the exercise might be quite unknown in the western world, this was already the 20th anniversary of the cooperation between the Royal Bahraini Air Force and the USAF. Initial Link is now a held every other year, and started in 1988 as an exercise to help the Bahraini AF enhancing their flight operations on the F-5 and later with the F-16 when it arrived in 1990. The Gulf War formed a basis for an intensified military cooperation between the Gulf States and the United States. For Bahrain, this cooperation resulted not only in US deployments to Shaikh Isa but also in numerous joint exercises. Initial Link is one of those exercises and sees participation of several air forces of countries in the Gulf and various US units from the US Air Force, Navy, and Marines.

Unlike the American Red Flag or European Tactical Leadership Programme exercises, almost all participating units will deploy from their own bases in order to simulate real operations in the Gulf.

Participants this year were the 1 and 2 Fighter Squadron of the hosting country, based at Shaikh Isa with their F-16Cs, supported by the Bahraini 6 Squadron with their F-5Es at the same airbase. Six F-15C Eagles from United States Air Force 390th Fighter Squadron based at Mountain Home, Idaho were deployed to the main Bahraini Fighter base. 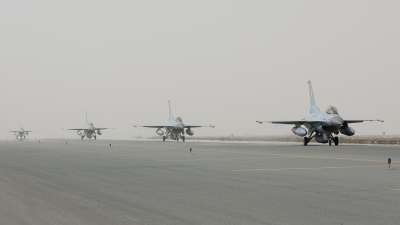 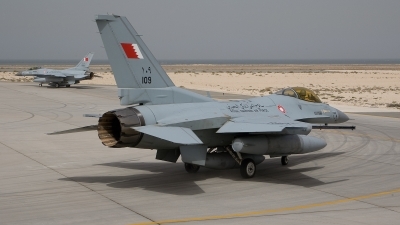 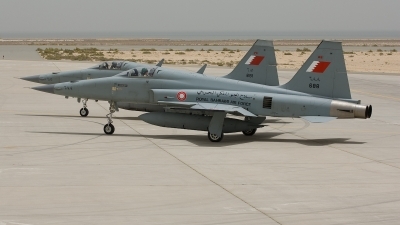 Most of the Gulf Cooperative Countries, often referred to as GCC, took part in the exercise as well. They would deploy from their own bases. The participating air forces would send their experienced pilots to take part in mission planning and evaluation at Shaikh Isa, sending feedback to their own colleagues in the countries. The following air forces took part in Initial Link 2008

Initial Link is a two-week exercise and typically starts at a Sunday. The first week sees familiarization flights, one v one dogfights and extensive briefings. The second week, more complex missions are flown, including massive attack and defense patterns.

A number of target areas in the United Arab Emirates and northern Kuwait were used to practice the missions. A typical mission would consist of a Red force attacking a target while a Blue force would do its best to defend. Two missions were conducted each day, if weather permitted and roles, which squadrons would be blue or red, would switch.

The following mission took place on Monday 19th of May with the Red Force, a group of four Bahraini Air Force F-16s with call sign Hotwar and four Saudi Tornados with call sign Arrow, attacking a target deep in the U.A.E. Desert. The Hotwar mission was supported by two Bahraini F-5s, call sign Spider, and four Mountain Home Eagles which made themselves known as Boar 01 till Boar 04. The Blue Force consisted of six brand new Block-60 F-16Es from the United Emirates operating from Al Dhafra airbase in Abu Dhabi and had the task to stop the attack. Not belonging to the mission, but closely observing it, was a Bahraini F-16D with call sign Hotwar 21 acting as a photo ship.

The Red Force took off at 15:00, first the Eagles shortly after that followed by the five Hotwar F-16s. They immediately turned eastbound to cross over Qatar and join for Air to Air Refueling at the Python refueling track just off the coast of the Qatar peninsula. Here all aircraft were topped off by a USAF KC-135R Stratotanker and after that setting course to the mainland. By this time the two Bahraini F-5E from 6 Squadron also left Shaikh Isa and headed straight for the target zone. To attract the attention of the defending blue forces the Spider mission went in first. Hidden behind them, flying a bit higher, the Boars looked for the UAE F-16s diving onto the two F-5s, and aiming their medium range Sparrow missiles at them. The Mountain Home Eagles, tasked with a sweep mission cleared the skies, making thy way free for the Hotwar and Arrow flights. The Bahraini F-16s and Saudi Tornados came in low and fast, 2000ft with 500 knots, not an easy task as the visibility above the deserts is often less than a mile. The target area consisted of 3 buildings and a large antenna and Hotwar01 took the antenna out first, followed by its teammates bombing the rest of the building. After passing the target, the jets pulled a 5g turn right and egressed as soon as possible. 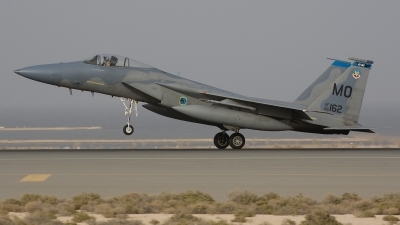 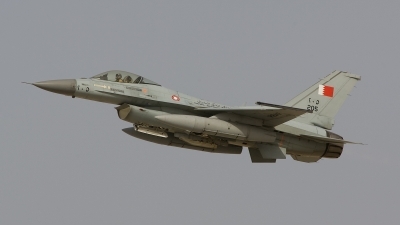 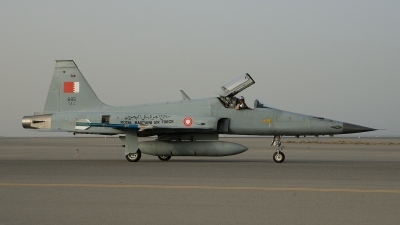 The Hotwar and Boar mission were planned to join again above the Gulf, but the four ship Eagles and the five F-16s did not manage to find each other and went home with their own formations. It had been a long mission, over two hours of flying time, and quite intense. Satisfied about the outcome, all pilots returned to base at 17:00.

During the second week several of these missions were planned, and the last day of the exercise a massive attack mission was planned. In total more than 40 aircraft were involved in targeting and defending, a grand finale.

Another Initial Link is being planned in 2010

You can see more photos by Frank Noort here.