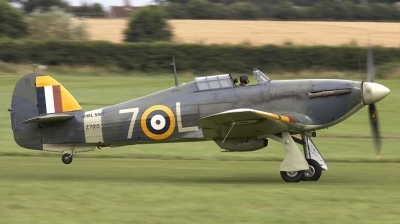 In the early hours of 9 April 1940, 'Unternehmen Weserübung', the Nazi invasion of Norway, had started. In an immediate reaction Britain had despatched the Gloster Gladiators of No.263 Squadron to central Norway to stem the rapid advanceof the German forces. On 24 April the unit landed their Gladiators at the frozen Lesjaskogvatnet in Oppland. Two days later all the Gladiators had either been lost in combat, destroyed on the ground, or otherwise rendered unserviceable. No.263 returned home to be re-equipped and on 21 May the new Gladiators arrived at their new base at Bardufoss near Narvik.
In the meantime, on 9 May, No.46 Squadron had flown their Hurricane Mk.I aircraft north to Scapa Flow for embarkation on HMS Glorious. On 26 May the Hurricanes flew from the carrier to the airstrip at Skånland and joined No.263 a day later at Bardufoss.
Both squadrons had to defend the fleet anchorage at Skånland and the military base at Harstad on Hinnøya island. After some days of fierce fighting the squadrons were instructed on 2 June to prepare for evacuation. In the short period of operating from Bardufoss, No. 46 Squadron lost 5 Hurricanes, three in combat, one aircraft missing and another crashlanding at Bardufoss. Rather then destroying their aircraft at Bardufoss before retreating, it was decided to fly the Gladiators and Hurricanes back to Glorious.
Although the aircraft were not adapted to operate from carrier decks and the feat of 'landing-on' was new to the RAF pilots, on 7 June, the ten surviving 263 Squadron Gladiators and at least ten of the Hurricanes of No.46 Squadron landed succesfully on HMS Glorious. The carrier turned for home waters, but on the next day she ran in with the German warships Scharnhorst and Gneisenau. Within two hours Glorious disappeared beneath the waves with huge loss of life and all of the evacuated aircraft. So the RAF lost all her first 'Sea Hurricanes'*.

With the balance of power at sea shifting in favour of the Kriegsmarine, the German navy, the protection of merchant sea lanes came under serious threat. Not only had the Royal Navy lost two of her six carriers (HMS Courageous and Glorious, sunk on 17 September 1939 and 8 June 1940 respectively), the Fleet Air Arm was in desperate need of a modern capable carrier borne fighter aircraft. The already outdated Sea Gladiator had only been introduced into FAA-service as a stopgap pending the arrival of the new Fairey Fulmar in 1940. As it turned out the Fulmar performed below expectations.


Towards the end of the Battle of Britain, the situation in the Western approaches became even more desperate with the appearance of long-range Focke Wulf Fw 200 Condors based in south western France. Soon the losses to shipping mounted. During October 1940 the feasibility to arm merchant vessels with expendable catapult-launched fighter aircraft was given serious thought.

The Hurricane goes to Sea
As seen above, at the time the Royal Navy did not possess a carrier-based fighter equal to land-based aircraft. The navalisation of the Hawker Hurricane seemed a logical step. And so from the summer of 1941 the Sea Hurricane was in service on all major Allied convoy routes, including those to the Sovjet Union.
Most Sea Hurricanes were converted from Mk.Is, Mk.IIs and Canadian-built Mk.XIIs.

Sea Hurricane IA
The first Sea Hurricanes were converted by General Aircraft Ltd., Hanworth, from RAF land-based aircraft and were intended to be catapult launched from Catapult Aircraft Merchantmen, the CAM-Ships or Royal Navy Fighter Catapult Ships. Over 30 merchant navy vessels, as well as 5 Royal Naval Auxiliary ships were fitted with were equipped with bow catapults.
The Merchant Ship Fighter Unit (MSFU) was formed on 5 May 1941 at Speke Airport (Liverpool) to man the CAM-ship detachments, each vessel having an RAF-pilot and service crew with a Royal Navy direction officer. Later that month, on 31 May, the first sea trials of the 'Hurricats' were conducted from the first CAM-ship SS Empire Rainbow.


The Mk.IA had catapult attachment points fitted to the rear of the centre section and lower rear fuselage to carry the aircraft on the catapult launch rail. These rails were mounted on the bow of the vessels. To enable the aircraft to be lifted on board, shackle points were provided on the centre wing section. The standard wing armament of eight Browning 0.303in (7.7mm) was retained an TR.1147 naval radio equipment fitted. An adapted pilot's head rest was fitted to prevent whiplash injuries during the launch of the aircraft. As they were intended as an expendable concept, no arrester hook was fitted. On sighting enemy aircraft approaching the convoy, the Sea Hurricane was launched to engage. On completion of the protection duties the pilot was forced to either ditch the aircraft or bail out.

The Sea Hurricane Mk.1A began equipping the Fleet Air Arm in January 1941, and the first operational unit, No.880 Squadron embarked on HMS Furious in July.


Sea Hurricane IB
It would take several months before the first 'true' Sea Hurricane, the Mk.IB, entered Fleet Air Arm service. The first series consisted of 25 Hurricane IIA Series 2 aircraft and were officially referred to as Sea Hurricane Mk.IB. These aircraft were also known as 'Hooked Hurricane IIs. Powered by the Merlin III engine, the Mk.IB was fitted with catapult spools and an arrester hook, necessitating the strengthening of the airframe to cope with the deceleration forces experienced when landing aboard a carrier. In 1940, the provision of a wing-folding mechanism was examined, but the desperate need for aircraft, as well as concerns over the Hurricane’s ability to accommodate the extra weight, eventually saw this idea abandoned.
The Mk.1B was armed with eight Browning 0.303in (7.7mm) machine guns.
By the end of 1941, some 100 Sea Hurricanes IBs equipped Nos.801, 806 and 885 squadrons. These were serving on HMS Argus, Eagle, Formidable and Victorious. Eventually 32 FAA-squadrons were to be issued with the Sea Hurricane IB. It saw service in the Atlantic, protecting the Russia-bound convoys and in the Mediterranean the Malta convoys.

Sea Hurricane IIC
Originally intended as new-built aircraft, the final version of the Sea Hurricane was the navalised conversion of the RAF Hurricane Mk.IIC. Powered by a Merlin XX engine and armed with four 20mm cannon, the IIC also had capacity to carry a 500lb (226.8 kg) bomb under each wing or rocket projectiles.

Sea Hurricane XII and XIIA
This version was converted from Canadian-built Mk.XII, powered by the Merlin 29 engine and armed with twelve Browning 0.303in machine guns. The Mk.IIA had eight Browning machine guns.


Preserved Sea Hurricane IBs
Perhaps the most well-known Sea Hurricane IB is the Shuttleworth Collection's airworthy Z7015. Built as a land-based Mk.I by the Canadian Car & Foundry Company at Kingston, Ontario, in the winter of 1940/1941. The aircraft was subsequently shipped to Britain and converted by General Aircraft Ltd., at Hanworth to Sea Hurricane IB.
Z7015 was issued to No.880 Squadron, FAA, on 29 July 1941. When this unit embarked on HMS Indomitable in October, Z7015 was transferred to No.759 Squadron. At the end of 1943, the aircraft became an instructional airframe with Loughborough College.
Since her post-restoration flight, on 16 September 1995, Z7015 (registered G-BKTH) is a much-loved performer at Shuttleworth Air Displays as well as at other venues in the country.
Today Z7015 is in the colours of No.880 Squadron, FAA. The aircraft is based at Old Warden aerodrome near Biggleswade, the home of the Shuttleworth Collection.


Also airworthy in Britain is Sea Hurricane IB AE977. This aircraft was built by the Canadian Car & Foundry Company at Fort William (now Thunder City) in Ontario as a Hurricane I.

This Sea Hurricane was restored by Hawker Restorations at Milden in Suffolk and, registered G-TWTD, made her first flight on 7 June 2000 from Wattisham airfield in the hands of Stuart Goldspink. AE977 was sold in the USA in 2001 (registered N33TF), but had returned on British soil by early August 2012. Based at Biggin Hill and registered G-CHTK, the aircraft was repainted as Hurricane I P3886 'UF-K' of No.601 Squadron for the 2013 air display season.
More recently AE977 appeared as P2921, 'GZ-L' of No.32 Squadron, as flown by F/L Peter Brothers during the Battle of Britain.

Random great photos of the Hawker Sea Hurricane 1B: 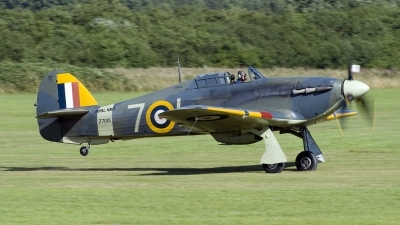 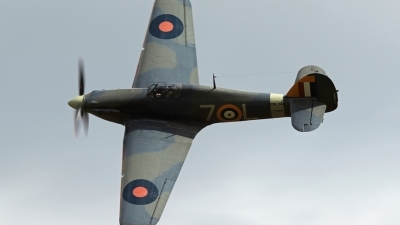 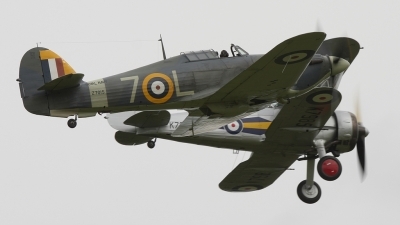 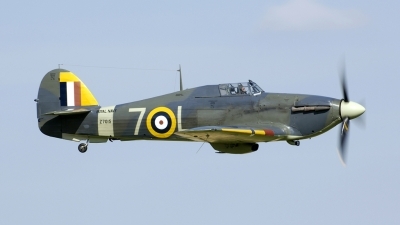 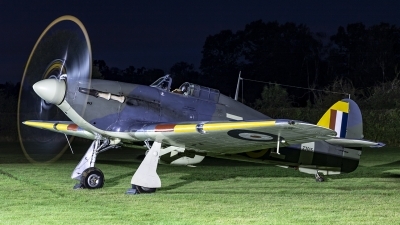 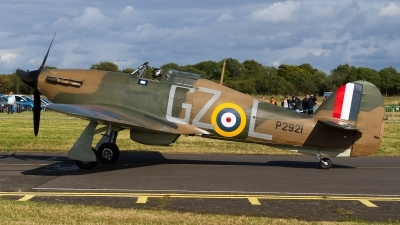