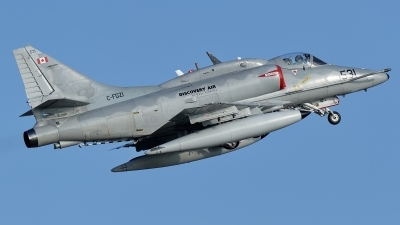 The McDonnell Douglas A-4N Ayit (Hebrew for Eagle) was the fourth operational version of the breed, after the A-4E, A-4F and A-4H, to enter service with the Israeli Air Force, the Zroa HaAvir VeHahalal (Air and Space Arm), but commonly known as the Heil HaAvir (Air Corps) or Israeli Defence Force/Air Force (IDF/AF).
The A-4N version was based on the airframe of the US Marine Corps A-4M, and retained the uprated Pratt&Whitney J52-P-408A turbojet engine. Main difference between the two versions were the avionics, navigation and weapons delivery systems. Initially equipped with a Lear-Siegler Inc digital computer, this system was replaced by Israeli made equipment, produced by Haifa-based Elbit Systems Ltd. The IAI Tamam Division’s inertial navigation system replaced the US system, as was the Elliot Automation HUD. After arrival in Israel this system was gradually replaced by a locally designed and produced system.
The A-4Ns were delivered with AN/APQ-145 radar, but from 1982 a number of aircraft were fitted with the AN/ABS-19 Angle Rate Bombing system (ARBS), recognisable by the sensor in a glass nose cone also seen on the US-operated A-4M, although without the associated ECM blisters. Aircraft '309', '331' and '337' of No.116 Squadron are known to have been fitted with the ARBS. The original cannon armament of the A-4M, two Colt 20mm cannon made way for two French-designed but Israeli-manufactured DEFA 30mm cannon, with 150 rounds per gun.


A-4N Ayit for Israel
The A-4N was first flown from Palmdale, California on 8 June 1972, piloted by McDonnell Douglas Experimental Test Pilot John P. Lane. The Israeli test pilot being Yachin Kochva.
While some sources give the number of A-4N delivered to Israel as 129, it is generally accepted, that in total 117 aircraft saw their way to the Israeli Air Force:

The aircraft were built and delivered between 1972 and 1976. The first new A-4Ns arrived in January 1973, with the first aircraft equipping No.115 ‘The Flying Dragon Squadron’ at Tel Nof Air Base.
The baptisme of fire for the newly arrived Skyhawks came within months, with the Yom Kippur War starting on the 6th of October 1973. Until the end of hostilities (on the 25th of October) seven A-4Ns of No.115 Squadron were lost with 2 pilots becoming prisoners of war, one pilot listed as ‘missining in action’ and 4 pilots as ‘killed in action’. One of the aircraft lost, and her pilot, Major Itzhak Ofer, killed, on 11 October was ‘322’ (BuAerNo.158726) over the Golan Heights. In 20 days of combat The Israeli Air Force approximately lost 112 fighter aircraft, with one-half of all losses occurring in the first three days of the war. It is generally accepted that 53 to 55 Israeli Skyhawks (A-4E, F, H and N) were lost in the Yom Kippur War. A significant number of the losses were caused by SAMs, including the infrared-guided SA-7 Grail. The SAM- threat resulted in an ad-hoc modification, known as the ‘Chavit’ (Barrel) to reduce the infrared signature of the aircraft. A trial installation had been fitted to an A-4N by No.22 Air Maintenance Unit at Tel Nof. After some test flights, the first aircraft to be fitted with the modification was flown to the Israel Aircraft Industries (IAI) works at Lod Airport on 20 October 1973. With ‘the barrel’ fitted overnight, the aircraft returned to 115 Squadron next morning. The Chavit jet pipe extension modification increased the overall length of the A-4N increased with 10.6 inches (27 centimetres) to 41 ft 2.5 inches (12,56 metres). Not only allowed the Chavit the jet exhaust to cool, it also placed the heat plume as seen by the missile seeker further behind the main airframe structure. If a infrared missile did explode in the heat plume, it was likely to be further behind the aircraft where shrapnel of proximity-fused warheads could do less damage to vital parts such as the tail control surfaces.

Other war action for the Ayit followed in 1978 in Southern Lebanon. In 1978 a new Skyhawk unit was activated: No.147 Squadron, ‘The Flying Ibex’ at Hatzerim AB, with A-4E, F and N. However, from 1984 the Skyhawk Force started to reduce, with 110 Squadron (‘The Knights of the North') flying the A-4E and H, converting to the F-16A, while No.149 Squadron went on as a Kfir unit. The last major conflict in which Skyhawks saw action was from June 1982 in ‘Operation Peace for Galilee’, although from July 2006, in a second Lebanese War, A-4s were employed, this time mainly TA-4s for night-illumination and electronic support.

Early in the new millenium an upgrade programme for the circa 50 remaining A-4Ns and TA-4Js got underway, centered around the RADA Electronic Industries Ltd Autonomous Combat Evaluation (ACE) system to replace the outdated EHUD and Chrystal systems. From 2002 the ACE-II system was installed by Israel Aircraft Industries, with the first modified aircraft, IDF/AF ‘342’ (ex BuAerNo.159808), flying in December 2004 and handed over to the Air Force on 3 March 2005. The modified aircraft became known as AyitM (M for Meshopar or ‘Improved’). At the time it was envisaged for the Ayit to remain in service until 2015-2020, but the type was eventually retired on 15 May 2015.

Air-to-air missiles:
Four AIM-9B and D Sidewinders at a later stage supplemented or replaced by four Shafrir II short-range infrared AAMs, produced by RAFAEL Defense Systems, Israel. Usually only one missile (on the outboard station) was carried to enable the aircraft to carry the maximum offensive ordnance possible.

Bombs:
Two Martin Marietta AGM-62 Walleye unpowered TV-guided glide bombs, usually fitted with a 113 kg high-explosive warhead or two 2,000 lbs Rockwell International GBU-8 Hobo TV-guided glide bombs.
Up to six Rockeye II Mk.20 Cluster Bomb Units, with three on a Triple Ejector Rack (TER) on the centreline station and two on the inner wing stations being a commonly used combination. Instead of the Mk.20 up to six Rockeye Mk.7/APAM-59 CBUs could be carried.

The Mk.80 series of guided and unguided bombs, for example a combination of six 500 lbs Mk.82 on a Multiple Ejector Rack (MER) on the centreline station, with four on a MER on the inboard wing station and two on the outboard wing station.

AN/ABS-19 ARBS-equipped A-4Ns could carry Paveway I and II and the indigenous IAI Griffin series of Laser-guided Munitions.

Canada
Canadian company Top Aces (earlier known as Discovery Air Defense Services) currently has seven former Israeli Air Force A-4N Skyhawks deployed to Germany under contract of the Bundeswehr to provide high speed adversary air training services. Based at Wittmundhafen Air Base in East-Friesland, the aircraft, together with the Top Aces Alpha Jets, are temporarily operating out of Nordholz, while construction work at Wittmund is underway. It is expected that Top Aces will return to Wittmund in 2025.

In the table above from left to right:
Canadian civilian registration; McDonnell Douglas construction number; sequence number; IDF/AF identification number, commonly painted on the nose or on the fin.

Israel
The Israeli Air Force received 117 A-4N Skyhawks between 1972 and 1976, with the first aircraft (BuAerNo.158726) flying on 8 June 1972. It was noted at Palmdale, California, with "Skyhawk II" titles in black on both sides of the fuselage and the number '726' in Israeli style on both sides of the lower vertical fin. After shipment to Israel the aircraft became 2322 '322' in IDF/AF service and delivered to 115 Squadron at Tel Nof Air Base. The aircraft was lost in the 1973 Yom Kippur War.

No.140 'The Golden Eagle' Squadron was activated at Etszion AB in 1973, becoming the first Operational Training Unit for the A-4N, before relocating to Ramon AB in 1984. In November 1985, the OTU task was transferred to No.116 Squadron. No.140 Squadron now operates the F-35 out of Nevatim AB.

No.147 'The Flying Ibex' Squadron operated a mix of A-4E, F and H Skyhawks as well as the A-4N from Hatzerim AB. In 1981 the squadron became a reserve unit and was disbanded in 1986. The squadron was also referred to as 'The Goring Ram' and 'Goring Deer' Squadron.

USA
In 2000 and 2001, the Israeli government sold seventeen surplus Skyhawks to the Mesa, Arizona-based company Advanced Training Systems International (ATSI). Ten A-4Ns and three TA-4Js joined the FAA-register for defence contract work in the US, while four A-4Ns were prepared for onward sale to BAE Systems Inc. Flight Systems Division at Mojave, California. These four aircraft deployed to Germany for use as target tugs at Wittmundhafen Air Base in East-Friesland.

BAE Flight Systems detachment at Wittmundhafen.
BAE Systems Inc. Flight Systems Division at Mojave, California obtained four ATSI Skyhawks to be deployed to Germany for use as target tugs at Wittmundhafen Air Base in East-Friesland. The aircraft were flown to Germany in September 2001. All four machines returned to the US in December 2014 after the contract came to an end.

The company further acquired two former IDF/AF Skyhawks ‘444’ (ex BuAerNo. 159545 with c/n 14465) and ‘395’ (ex BuAerNo. 159530, c/n 14450) from ATSI, where they had been registered as N262WL and N668WL, respectively becoming N166EM and N167EM on 7 January 2015. Both aircraft were detached to the French company Secapem Defence Training Solutions based at Nîmes-Garons AB, providing ‘Red Air’ aggressor training for the French navy, arriving at the French base on 6 August 2015.
Earlier another former IDF/AF A-4N Skyhawk had been used at Nîmes fo this type of training: this was ‘415’ (ex BuAerNo.159536, c/n 14456) of the American ATSI company and registered N269WL. The A-4 was leased to the French Aviation Defence Services (AVDEF) and registered F-ZVDM for the duration of the contract. The aircraft was reregistered N269WL on 1 September 2009 until this registration was cancelled on 12 December 2014. The Skyhawk was registered C-FGZH on 16 December 2014 for Canadian Top Aces and is currently based at Nordholz, Germany. 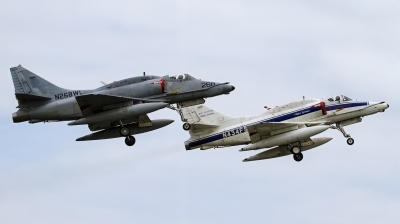 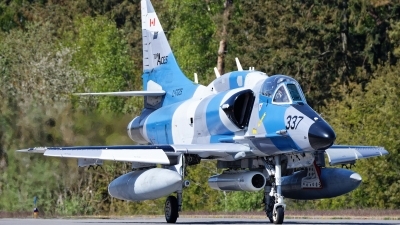 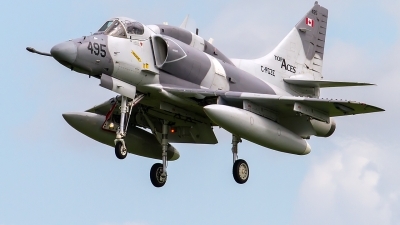 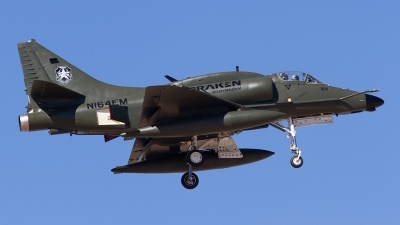 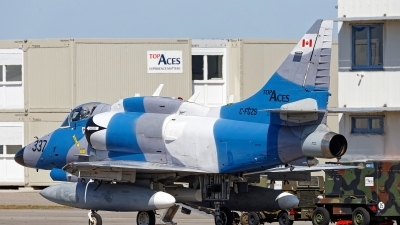 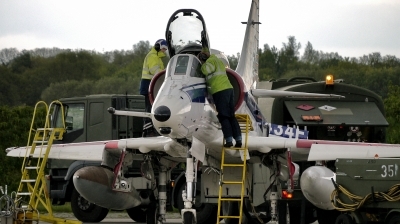