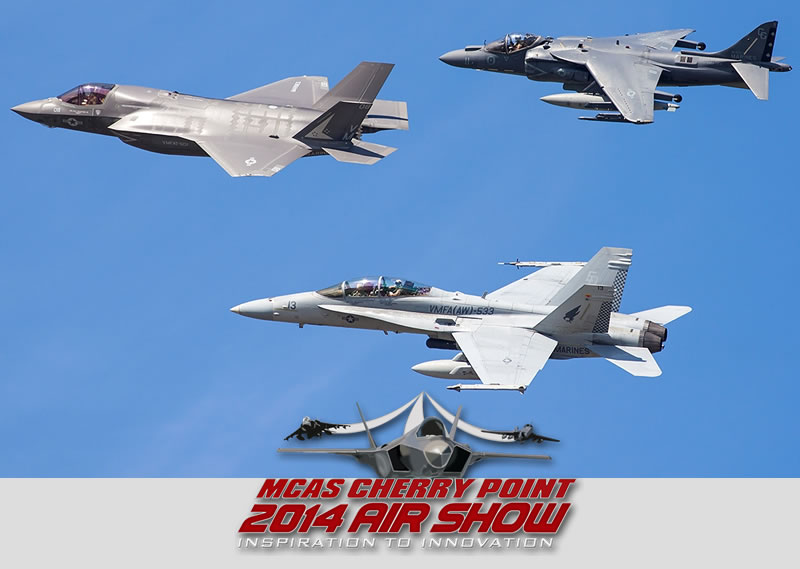 Originally commissioned as Cunningham Field, Marine Corps Air Station (MCAS) Cherry Point opened its doors in mid-1942 to train Marines for combat in the Pacific theater. The base picked up its name from a local post office situated near a grove of cherry trees, and still trains Marines for combat. Now home to Marine Air Groups (MAG) 14 and 29, everything from helos to Harriers can be found at MCAS Cherry Point. In mid- May, the base opened up for a much-anticipated airshow, one of the biggest on the east coast this year.

Despite an initial yet brief cancellation of the show last December amid budget woes, it seems that MCAS Cherry Point made entirely the right move reinstating the popular North Carolina event. With many events and major airshows around the country scaling back if not canceling, it was refreshing to see Cherry Point going ahead full-steam with this year’s show, and it certainly paid off. Even with limited resources available for funding non-essential operations (an airshow would hardly qualify as essential to supporting worldwide USMC operations), the command at Cherry Point and its personnel are to be commended for giving the public such a fantastic opportunity to support the men and women of the United States Marine Corps.

The day before the show was to begin, a massive weather system that blanketed the east coast with copious amounts of rain threatened to wash out the weekend. But the forecast held steady, and the system pushed through the area as expected. For at least the Friday & Saturday performances, the showgoers enjoyed a window of outstanding weather with unseasonably cool temperatures and mostly clear skies, before the area clouded up again on Sunday. In stark contrast against the deep blue Carolina sky numerous quality performers ranging from Dan Buchanan’s hang-gliding routine to the thrilling Marine Air Ground Task Force (MAGTF) demonstration.

While military statics were mainly limited to local USMC assets, among the notable appearances were a pair of former Royal New Zealand Air Force jets now operated by Draken International. Although they didn’t fly during the show, the McDonnell Douglas TA-4K Skyhawk and Aermacchi MB-339CB, each sporting a dark green scheme were a welcome addition to the static lineup. Also on the ramp were several warbirds from the Dixie Wing of the Commemorative Air Force, including a Douglas SBD-5 Dauntless and a unique Japanese Zero replica. The Disabled American Veterans B-25 Mitchell named "Panchito" also spent some time in the static display area, but also flew during the show.

The flying aspect of the show was varied and engaging, and despite the lack of one of the major military jet teams (i.e. the US Navy’s Blue Angels), many civilian performers took to the skies for many impressive displays of airmanship. The Black Diamond Jet Team, with a veritable "who’s who" of veteran airshow performers, impressed with their precision formations in their L-39s each sporting a stunning arctic camouflage scheme. Over 110,000 attended the 3-day event over the weekend of May 16-18, 2014, and the MCAS Cherry Point Commanding Officer Col. Chris Pappas III praised the efforts of all involved, saying "I want to offer my sincere appreciation for all the long hours, in- depth planning, professional execution, and personal devotion of the Marines, Sailors and civilians that made this show a tremendous success." 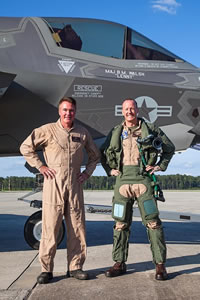 This year’s show was themed ‘Inspiration to Innovation’ and featured a headlining performance from the USMC’s latest fighter/attack aircraft, the Lockheed Martin F-35B Lightning II. Several F-35Bs from the Marines’ training squadron, VMFAT-501, made the trip eastward from their home at Eglin Air Force Base. Although it wasn’t the first time an F-35 has landed at Cherry Point (the aircraft had previously undergone depot- level maintenance at the Fleet Readiness Center Southeast, or FRCSE), it was the first time that the F-35 had performed for the public here. After performing a subdued yet still remarkable demo including slow flight and a hover, the F-35 then joined up with an F/A-18D Hornet and AV-8B Harrier for a USMC Legacy Flight while a FG-1D Corsair made multiple but separate single-ship passes. While certainly quite the sight to see the Lightning II/Hornet/Harrier trio, it would have been a real treat to see the Corsair and F- 35 flying in formation. Maybe next time! 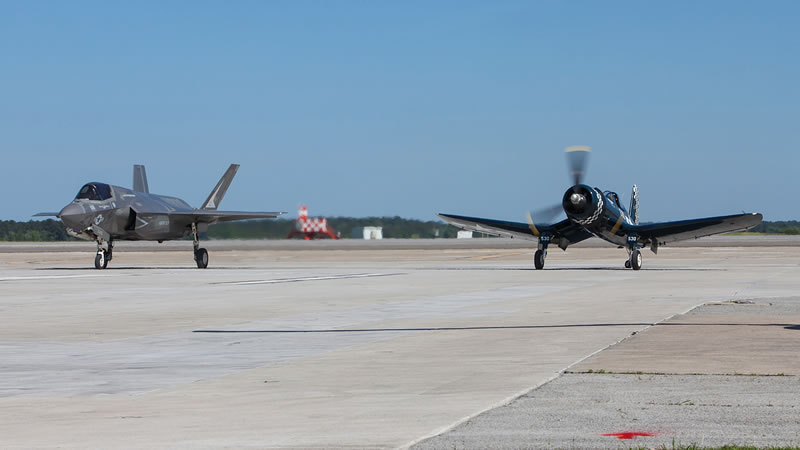 In addition to the F-35 demonstration, the USMC put on several impressive single-ship and multi-aircraft displays including many of the local assets from nearby USMC air stations Beaufort and New River. Single ship routines were flown by an MV-22B Osprey, AV-8B Harrier and, much to the delight of the author, the local Search-And-Rescue (SAR) HH-46E affectionately known as ‘Pedro’ operated by VMR-1 "Roadrunners." These twin- rotor helicopters soldier on dutifully despite their age, providing the base with its own rescue force and also assisting in civilian emergencies. Since these unique helos will eventually be replaced with a newer type, the opportunity to photograph them up close and in action was very much appreciated. 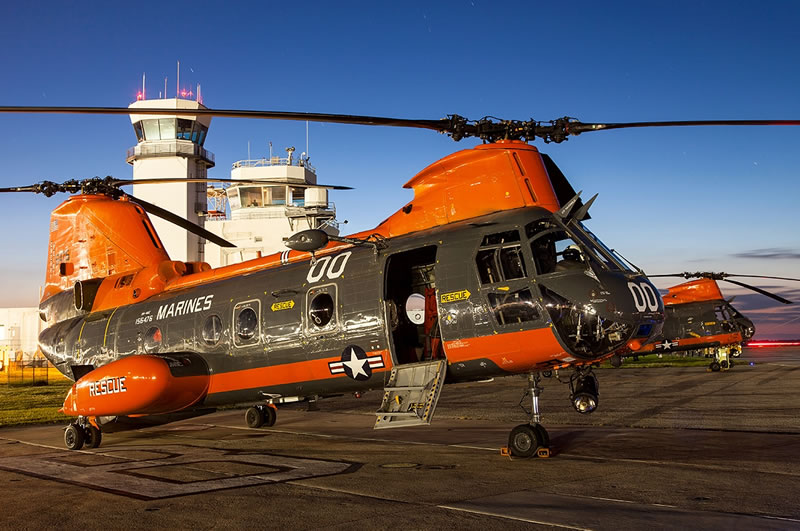 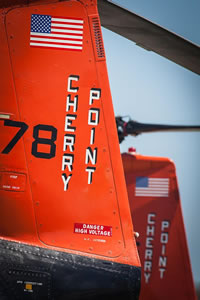 Also in the air over Cherry Point was the MAGTF demonstration, a combined ground and air operation featuring all aspects of Marine aviation. Flying in this demonstration were a pair each of F/A-18Ds from VMFA(AW)-533 "Hawks" and AV-8B Harriers from VMA- 231 "Ace of Spades" for fixed-wing attack, with a single EA-6B Prowler from VMAQ-2 "Death Jesters" simulating the laying down of some electrons in a Suppression of Enemy Air Defenses (SEAD) capacity. Fueling the fight was a KC-130J from VMGR-252 that made a nice pass with a Hornet and Harrier in a refueling position. Not to be outdone, numerous rotary-wing assets were involved including a pair of UH-1s, MV-22Bs, and one each CH-53E and AH-1. These helos directly supported Marines on the ground in their insertion into "hostile" territory, while the Hornets and Harriers screamed overhead. The MAGTF demo provides a unique look at the rapid response capabilities of the USMC and how various assets operate together to achieve a common objective. 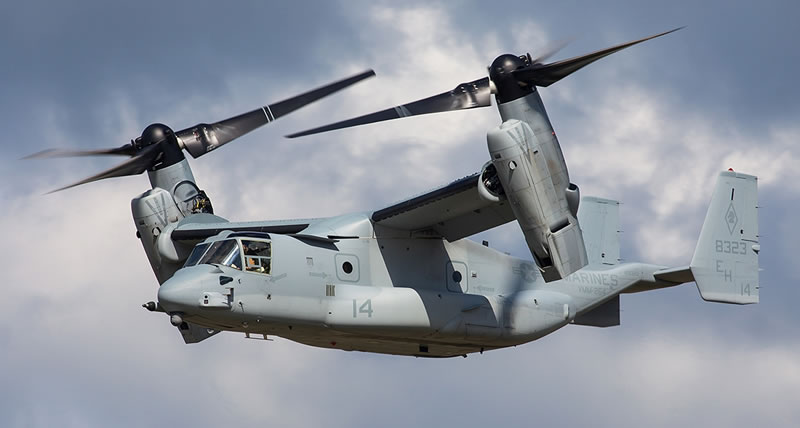 The Marines are known as the "tip of the spear" and the 2014 MCAS Cherry Point Airshow gave the public a great look into USMC operations. For those interested in attending the next edition, the 2016 Cherry Point Airshow is scheduled for the spring of 2016 and it promises to build upon this year’s proven success.

The author would like to thank LT’s Hector Alejandro and Danielle Dixon as well as the rest of the MCAS Cherry Point Public Affairs Office for their tireless support. 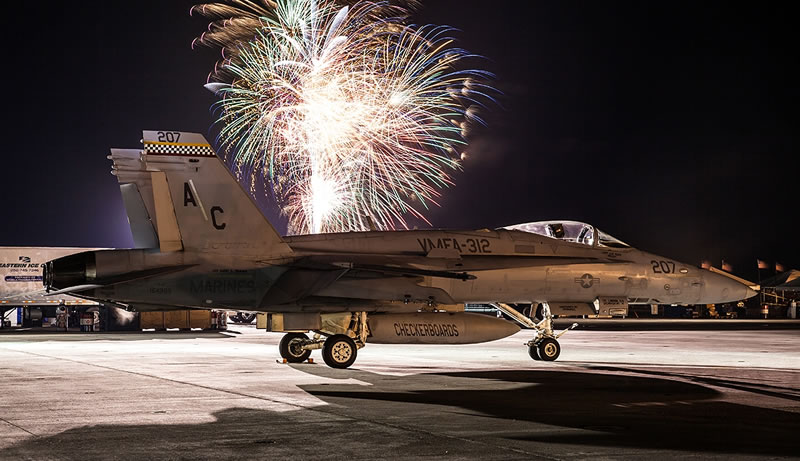