A review of Tiger Meet 2011 at Cambrai

An organization rich in history and unrivaled in enthusiasm, the NATO Tiger Association (NTA) began in 1961 as an effort to promote relations between various squadrons within the realm of NATO. The USAFE’s 79th Tactical Fighter Squadron (TFS), Royal Air Force’s 74 Squadron, and French Armée de l’air EC 1/12 Squadron joined together at RAF Woodbridge and set the following goals: Tiger Tiger Tiger!
Among the most distinguishing characteristics shared by each of these original squadrons is the Tiger motif – a theme that has persevered over the last 50 years with its 21 full-member units and it is reflected in the paint schemes that make the Tiger Meet so unique. As there is no NATO command presiding over the Tiger Meet, the host squadron assumes responsibility of coordinating the Tiger activities as well as mission scenario planning.

The present day Tiger Meets have vastly expanded from a humble beginning as a social gathering to a large-scale exercise. The twice-daily Combined Air Operations (COMAO) mission forms the foundation of the flying activities during the NTM, and the sorties vary to include Close Air Support (CAS), Combat Search and Rescue (CSAR), border defense, interception, range operations, weapons employment, and many other scenarios. This year’s Tiger Meet took place at Cambrai Air Base during May in northern France, with the host squadron EC 01.012 “Cambresis” offering several ‘spotter days’ in which the public could get a glimpse of the Tiger spirit and take home some Tiger swag. One of the many traditions among squadrons is the competition for best paint scheme, and for this reason the Tiger Meets are wildly popular among military aircraft enthusiasts all over Europe. Tiger Meets also attract an ever-growing number of participating aircraft and this year’s 50th anniversary event was no exception. However, despite original plans for Cambrai to host the largest ever Tiger Meet were unfortunately affected by real world combat operations. Participating Tiger units from Norway, Belgium, and the Netherlands were unable to attend due to operational commitments including support of Operation Odyssey Dawn in Libya. 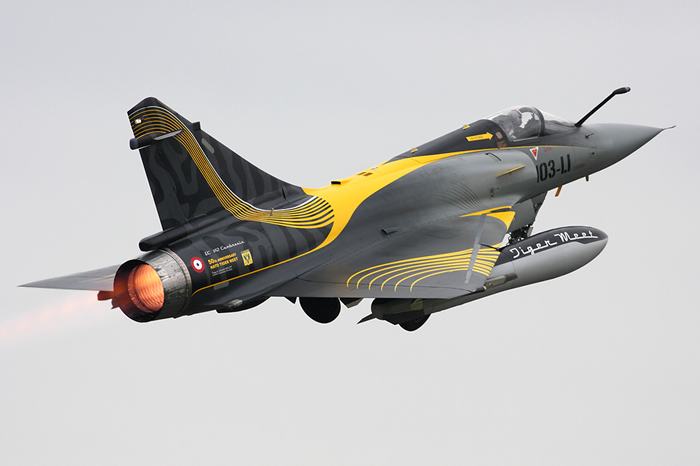 2011 Participants
In addition to the flashy paint schemes, a large draw for enthusiasts and phot ographers to the Tiger Meets is the variety of aircraft types and operators. The German Air Force brought both IDS and ECR versions of their Tornados, while the Austrian AF sent a pair of Saab 105s. For the Viper fans, a large number of F-16s including those from Turkey, Poland, Portugal, and Greece were present, with the Greek Air Force’s 335 Mira being promoted by the NTA this year to full membership status. While the Belgian’s 31 Smaldeel remained committed to Libyan operations, their stunningly painted Tiger did make an appearance at Cambrai. Also present were F/A-18 Hornets from the Swiss and Spanish (11 Staffel and Ala 15, respectively). Saab JAS39 Gripens were flown by the Czech AF’s 211 Squadron, while 221 Squadron brought a pair of Mi-35 Hinds to complement the helicopter contingent. Slovakia’s 1st Fighter Squadron is an honorary member of the NTA, and a pair of their MiG-29s made a welcome addition to this year’s events.

Future of Cambrai
Among the defense spending cuts of recent years in France, eight French military air bases will close in between 2009 and 2012. Cambrai is included and is among the last to close in 2012 and along with it EC 1/12 and its Mirage 2000s will disappear. There are hopes that this historical unit and the Tiger tradition will be transferred to another unit, however the future is “up in the air” for this NTA founding member.

Tiger Meet 2012
Next year’s NATO Tiger Meet will take place from 28 May until 8 June at Monte Real Air Base in Portugal, and will be hosted by 301 Squadron. For more information on this and other Tiger Meets, and about the NTA itself, please see www.natotigers.org.

Thank you to Mark Munzel, Walter van Bel, Kevin Jackson, and Frank Grealish for their support of my visit to Cambrai.