A review of Sentry Eagle 2011 at Klamath Falls, Oregon. 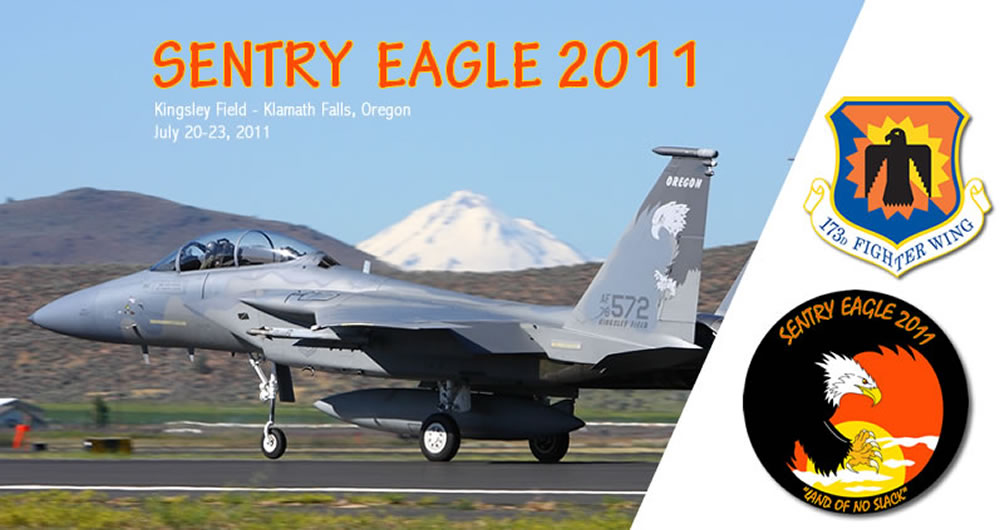 Last held in 2007, the exercise returned in July 2011 after a four year hiatus, much to the delight of the ANG fighter community. Noticeably absent were many F-15 Eagle units, many of whom have given up their jets in recent years as a result of the Base Realignment and Closure Commission's recommendations. Of the few remaining ANG units flying F-15s, many were unable to attend due to operational considerations and inspections. This left the home-based 173rd FW and Montana ANG's 120th FW as the sole F-15 participants. With the lack of 'flying tennis courts' the exercise was dominated by a wide variety of ANG F-16 units from South Dakota, Texas, Oklahoma, California, Arizona, and Colorado. "The Land of No Slack"
The host of exercise Sentry Eagle, the Oregon ANG's 173rd Fighter Wing and associated 114th Fighter Squadron belong to the Air Force's Air Education and Training Command (AETC). Following the recent disestablishment of the F-15 training units at Tyndall AFB, Kingsley Field now serves as the only base with a mission to train Eagle pilots. Located halfway between Portland and San Francisco, the origins of military presence in the area began with the opening of Klamath Falls Naval Air Station in 1942.

The United States Air Force (USAF) quickly realized the strategic value of the location, and took over the facility in 1954 and subsequently an all-weather fighter-interceptor squadron was established in Klamath Falls. In 1956 the airfield was officially renamed Kingsley Field in honor of WWII Second Lieutenant David Kingsley. A bombardier on Boeing B-17s, Kingsley became a Medal of Honor recipient after his death in 1944 during a raid on the oil fields of Ploesti, Romania. When his aircraft became fatally damaged and the order was given to bail out, the Oregon native heroically gave his parachute to the wounded tail gunner who was missing his parachute, thereby saving the gunner's life but sealing his own fate when the B-17 crashed.

Kingsley Field remained an all active-duty USAF station until 1970, when the Oregon ANG's 104th Tactical Control Squadron began operations in order to provide ground radar support for flying activities. The USAF later chose Kingsley Field as an air defense training facility, and the 8123rd Fighter Interceptor Squadron (FIS) stood up on 1 January 1983, flying the venerable McDonnell Douglas F-4C Phantom II. A year later the squadron was later designated the 114th Tactical Fighter Training Squadron (TFTS), and finally in 1992 the unit received it's latest designation as the 114th Fighter Squadron (FS). The unit operated the F-4C until 1988, when the General Dynamics F-16 Fighting Falcons replaced the Phantoms. The 173rd Fighter Wing was established in 1996 incorporating the 114th FS, and two years later the wing transitioned to the F-15 Eagle which it still flies today.

Sentry Eagle History
First held in 1986 by the 114th TFTS, Sentry Eagle was developed in order to increase the unit's effectiveness in aerial combat. So successful was this first edition, that the exercise was held annually for several years until the decision was made to move to a biannual schedule. A typical Sentry Eagle exercise now features between 40 and 50 fighter aircraft along with several hundred deployed support personnel. Although ANG fighter units heavily dominate the exercise, past Sentry Eagles have included active duty and reserve USAF units, along with participants from the US Navy and Marine Corps.

According to 173rd FW Commander Colonel James Miller, Sentry Eagle "provides an excellent opportunity for our service members from different units to come together for valuable training...Kingsley is an optimal training location with its extensive range space and good flying weather." The ranges utilized by the 173rd FW and participants of the exercise are not only vast, but they are located just minutes from Kingsley Field. The proximity of the range airspace to Kingsley is a great benefit not only to the exercise, but also the 173rd's primary mission of training. Since less time is spent on flying to and from the ranges, it translates to more time available for training - or in the case of Sentry Eagle - mock combat. While the exercise missions can be tailored to the participating units' training objectives, the focus of Sentry Eagle is large force aerial combat. To this effect, two missions were flown daily during the exercise with 3 to 4 jets per unit through a variety of red versus blue air scenarios. Open House
The 173rd FW relies heavily on the support of the surrounding community for day-to-day operations, and Sentry Eagle's Open House is the "premier venue for Kingsley Field to say thank you to the greater southern Oregon northern California residents for their continued support," says Col Miller. Although not billed as an airshow, the Open House gives the public an incredibly unique and close look at the variety of participating aircraft and their operation during Sentry Eagle. The USAF’s Aerial Combat Command also sent a pair of F-15E Strike Eagles from the F-15E East Coast Demonstration team, to perform a tactical demonstration during the open house.

Future of Kingsley
The mission of the 173rd FW is to "train the best air-to-air combat pilots" in the F-15 Eagle and the wing will continue this mission for the foreseeable future. With budget constraints casting a shadow of uncertainty on the future of the F-15 in the USAF, what is known is that Kingsley Field’s 173rd FW stands ready to fulfill any mission the nation requires.