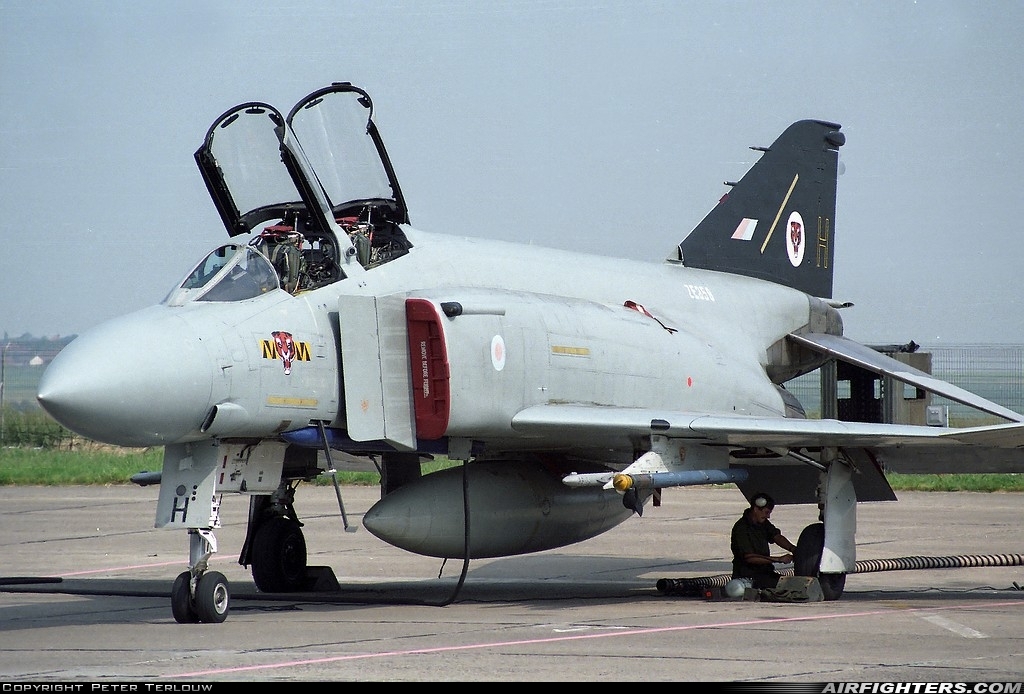 F-4J(UK) Phantom
At the conclusion of the Falkland Islands war the descision was taken to reinforce the air defence capacity of the archipelago. From the 14th June, 1982, the day of the Argentine Forces surrender, the air defence had been in the hands of the Sea Harrier FRS.1 of No.800 and 801 Squadron, Fleet Air Arm, at Stanley, the island's main airport. Before that date the Sea Harriers had operated from the two aircraft carriers, HMS Hermes and HMS Invincible. To bolster the defence force of the islands (the Falkland Islands Protection Zone), a detachment of Phantom FGR.2s from No.29 Squadron, RAF Coningsby, was sent south.
On 17 October 1982 the No.29 Squadron Detachment, led by W/C Macfayden landed at RAF Stanley. There the single runway had been strenghtened and lenghtened to 6,100 ft. As the air defence variants (ADV) of the Tornado, the F.2 (and ultimately the F.3), were only expected to enter service in early 1985, the deployment of the FGR.2s to the Falklands resulted in a seriously reduced capacity of the RAF's air defence of the British Isles and her commitment to NATO. To restore this situation as soon as practicable, and also to boost the air defence even when the Tornado ADV entered service, the RAF sought means of acquiring additional Phantoms. Clearly it was no option to restart production of Spey-engined Phantoms, but the closest compatible type, readily available in substantial numbers, appeared to be the F-4J Phantom. Many of these former US Navy and US Marine Corps aircraft had been stored following their replacement by F-14 Tomcats and F-4N and F-4S Phantoms.

The F-4J was the final version of the Phantom to be placed in production for the US Navy and US Marine Corps and was designed as the follow-on to the original naval Phantom, the F-4B.
A total of 522 F-4Js were built for the Navy and Marine Corps between December 1966 and January 1972. The aircraft was powered by a pair of General Electric J79-GE-10 engines. Increased aircraft weight and the more demanding sink rate requirements, the F-4J featured a strengthed landing gear with larger mainwheels. In order to accommodate these larger mainwheels, the upper and lower surfaces of the inner wing had to be bulged outward similar to the F-4C of the USAF. An additional fuel cell was fitted in the rear fuselage to bring internal fuel capacity to 1977 US Gallons (fuselage tanks holding 1374 USG, 9,024 lbs, with another 630 USG, 4,221 lbs in internal wing tanks). However, the number 1 fuel cell was slightly reduced in size to accommodate computers and other electronics.
The F-4J was also equipped with the AN/AWG-10 fire control system housed in an enlarged radome. This set used the AN/APG-59 pulse-Doppler radar, designed to detect and track low-flying aircraft. The F-4J was fitted with the AN/ASW-25 one-way datalink to enable automatic carrier landings.
From 1969, Sidewinder Expanded Acquisition Mode (SEAM) was provided. This involved new wiring and the fitting of other items designed to make full use of upgraded Sidewinder missiles. The Visual Target Acquisition System (VTAS) helmet sight was fitted to Block 45-MC and 46-MC F-4Js, and was later retrofitted to most earlier aircraft. The Sanders AN/ALQ-126 electronics countermeasures equipment mounted on the upper air intakes. Two more antennae were added below the intakes. AN/APR-32 radar warning as well as AN/APX-76 or -89 IFF equipment was fitted. The earlier J79-GE-10 engines were replaced by the 10B version, reducing smoke emission.

The first production F-4J flew on May 27, 1966. The first F-4J deliveries to the US Navy commenced on 1 October, 1966, with VF-101 'Grim Reapers' receiving their first aircraft that December; the first Marine Corps unit to receive the F-4J was VMFA-334, which began to receive the type in June of 1967. Soon, the F-4J rapidly began to replace the F-4B in most operational US Navy and USMC squadrons. The F-4J served extensively in the Vietnam Conflict, from (the later stages of) 'Operation Rolling Thunder' (March 1965 until October 1968) and the 'Linebacker' campaign of 1972. The last F-4Js to leave Southeast Asia in August 1973 were the Nam Phong (Thailand) based aircraft of VMFA-232.

As the Grumman F-14 Tomcat entered US NAVY service in the mid-1970s and a number of units replacing their F-4Js by the F-4N. Meanwhile 265 F-4Js had been upgraded to F-4S standard. Surviving F-4Js became redundant and were retired from service, many placed in storage at the Military Aircraft Storage Distribution Center (MASDC)/Aerospace Maintenance and Regeneration Center (AMARC) at Davis-Monthan AFB, Arizona. The AMARC was officially redesignated on 2 May, 2007 as the 309th Aerospace Maintenance and Regeneration Group (AMARG).
The last unit to operate the F-4J Phantom, VF-74, finally exchanged their aircraft for the F-4S in 1982. The last US Navy F-4S Phantoms, of VMF-112 were retired in January 1992.


The F-4J Phantom for the RAF
With the transfer of a number of Phantom FGR.2 aircraft to the Falkland Islands in October 1982, in the following months the British Government obtained fifteen former USN/USMC F-4J Phantoms to bolster the UK Air Defence Region (UKADR). The F-4J, from which the RAF's F-4Ks (Phantom FG.1) and F-4Ms (Phantom FGR.2) had been developed, was therefore, the closest available 'match' to the British aircraft. The F-4S itself being unavailable for disposal due to US service requirements as well as the fact, that the F-4S initially incorporated refinements not required for land-based operations. This left a few F-4J aircraft that had not become part of the 'S' program for one reason or another, primarily through their previous assignments. All airframes for RAF use had to meet a 5 year service life (although they ultimately remained in service for just under 7 years) and of the 15 chosen, a fatigue modification package would have to be incorporated. By September 1983 the US Navy received two letters of offer, one for the purchase and rework of the aircraft and the second for the support package. The overall total for the entire project was £125 million, which also included some extra funding for British Aerospace, Ferranti and Westinghouse for the part they would play in the radar upgrade programme.

Initially, the following F-4Js had been offered for transfer to the British: BuAerNo.153773, 153783, 153785, 153795, 153803, 153824, 153850, 155510, 155529, 155574, 155755, 155784, 155849, 155868 and 155894.
Of these, three airframes were rejected as being unsuitable: 153824, 155784 and 155849. These were replaced by 153768, 155734 and 155892.
Subsequently these aircraft were extensively refurbished at the Naval Air Rework Facility (NARF) at NAS North Island, San Diego, and brought to a standard almost equivalent to the F-4S Phantom. The F-4J forming the basis with the airframe and engines, while a number of upgrades of the F-4S program were incorporated into the refurbishment program, essentially similar to the F-4S Service Life Extension Program (SLEP). This also included the upgrading the radar from the standard AWG-10 radar of the F-4J to the AWG-10B as in the F-4S. Other British requirements, the integration of the Skyflash missile and the SUU-23A gun pod, were also envisaged. Additional wiring was incorporated to allow the carriage of British Sky Flash missiles as well as the Telescopic Sighting System (TESS) situated in the rear cockpit and used to visually identify targets. In the summer of 1985 ZE360 (ex BuAerNo.155574) detached to Boscombe Down to investigate the modifications needed to employ Skyflash on the F-4J(UK). The aircraft retained their J79-10B engines and most of their American avionics. However, a number of systems were replaced by UK-manufactured systems. US Navy systems, the AN/ASN-54 Approach Power Compensator System, the AN/ASW-25 datalink system, and the AN/ALQ-126 ECM set, were removed, although the prominent antennae fairings of the latter, on the air intakes, remained on the aircraft. One aircraft, ZE350 (BuAerNo.153768), never had these fairings fitted. It had served with the Naval Air Test Center (NATC) at NAS Patuxent River, and being a test aircraft, there was no operational requirement for the ECM gear.

In the table above from left to right: RAF serial number; construction number; Bureau of Aeronautics number; NARF rework production number*; Delivery date to No.74 Squadron, RAF Wattisham; Unit and individual codeletter.
The rework production number (also referred to as USNavy IRAN number) was applied to the front nose wheel door early in the rework program at North Island. The numbers were painted over later as the aircraft received their RAF finish.


Type designation
Initially the new Phantoms were designated Phantom F.3, but subsequently they were generally referred to as F-4J(UK) Phantom.


F-4J(UK) into RAF Service
The first three F-4J(UK) aircraft were flown from Goose Bay to RAF Wattisham on 30 August 1984, landing at the Suffolk base in the early evening light. They were to equip the newly reformed No.74(F) Squadron. The squadron officially reformed at RAF Wattisham on 19 October 1984 under the command of W/C Richard 'Dick' Northcote. The remainder of 74's complement arrived in flights of 3 or four aircraft, with the last aircraft, ZE351, arriving on 4 January 1985. The F-4J(UK) was declared fully operational by the end of 1985. What followed was a busy year for the Tigers, including Missile Practice Camp, Tactical Leadership Programme as well as exercies such as Ocean Safari and the like.
Tragedy struck the unit on a August day in 1987. On the 26th ZE358/H (ex BUAerNo.155510) was taking part in a low-level intercept training sortie with two other Phantoms. The aircraft struck a hill side at Pant y Gwiar, to the northeast of Aberystwyth in Wales. Sadly F/L Ewan H. Murdoch and F/O Jeremy L. Ogg perished in the crash.
The F-4J(UK) Phantoms were eventually retired in early 1991, after some low-time Phantom FGR.2s from units converted to the Tornado F.3 became available to the squadron. However their hours with the Tigers were limited as No.74(F) Squadron stood down on September 20, 1992, disbanding the next day.


Where are they now?
ZE350, No.74(F) Squadron, 'T'; to RAF Laarbruch, Germany for Battle Damage Repair Training (BDRT) on 26 February 1991. Later the aircraft was taken to the Pendine Range (November 1996) and then to Foulness Island. Broken up (there?), with the forward fuselage and cockpit section going to Australia in October 2017. In October 2019 it was seen there in VF-101 standard US Navy c/s, with the 'last three' painted under the windscreen. 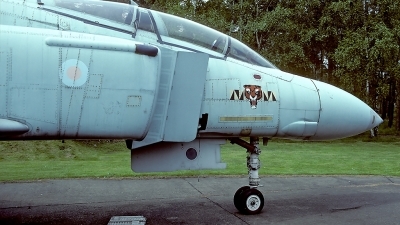 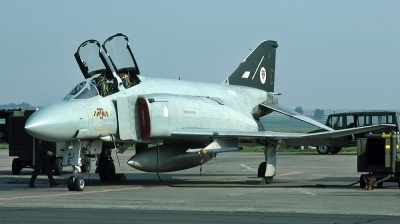 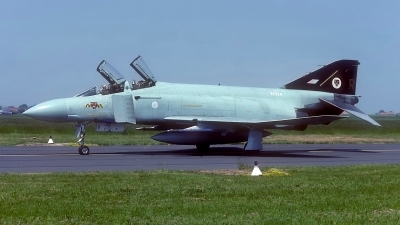 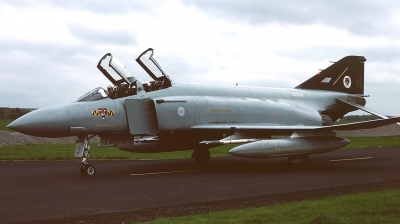 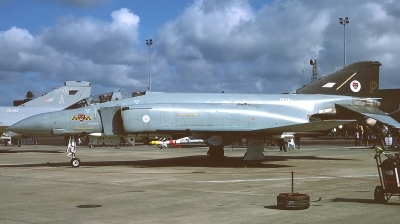 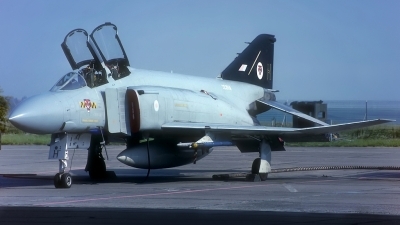