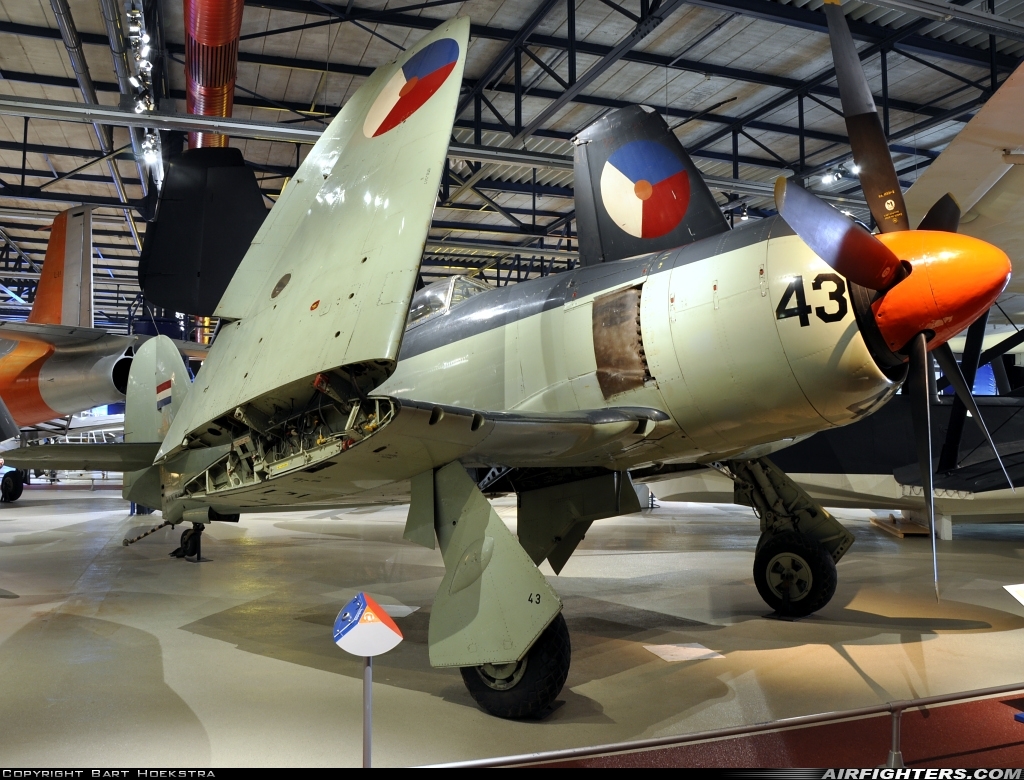 The first Dutch order for ten Sea Furies was placed on 21 October 1946. In Marine Luchtvaart Dienst (MLD) service, these aircraft were designated Sea Fury F.50 and were almost identical to the Sea Fury F.X entering service with the Royal Navy's Fleet Air Arm at that time. Apart from minor differences in equipment, the Dutch aircraft were also fitted with a different radioset. Of the original Royal Navy order for 100 Sea Fury F.X interceptor aircraft, only fifty aircraft were produced as such, the remainder being completed as FB.11, the fighter-bomber version of the Sea Fury.

The first Dutch batch of Sea Fury FB.50s, serialled 'J-1' tot 'J-10', were produced by Hawker Aircraft Ltd. The aircraft were test flown at Langley and subsequently ferried by Dutch pilots to NAS Valkenburg between April and May 1948. With Valkenburg as shore base, the Sea Fury went to sea aboard Hr.Ms. Karel Doorman*.

A second Dutch order, placed on 12 January 1950, called for the supply of twelve fighter-bombers, identical to FAA FB.11-standard and designated Sea Fury FB.60 in Dutch service. The aircraft were supplied from Hawkers production line at Kingston, at that time busy with producing FB.11s in the VX-serial range for the FAA. These diverted aircraft (VX712 to 719 and VX744 to 747) received serials 'J-11' to 'J-22' and were delivered to NAS Valkenburg between May and July 1950.

In the meantime the need for standardisation of the Sea Fury fleet had resulted in a contract for Hawkers to convert the MLD's F.50s to fighter-bomber standard. All but one were converted; F.50 J-1 had been lost in a crash near Valkenburg on 27 July 1950, killing pilot Corporal L. van Leeuwen. The converted aircraft were redesignated Sea Fury FB.60. The serials changed from 'J' to 'F' and ranged from 'F-2' to 'F-10'.

The Fokker Aircraft Company at Amsterdam had reached an agreement with Hawkers to build the Sea Fury under license. In total the company produced twenty five aircraft at their Amsterdam works. It is thought, that the first two aircraft, F-23 and F-24 were constructed from components supplied by Hawker. Allegedly F-24 was built with parts from VX748. According to Tony Buttler (in 'Sea Fury in British, Australian, Canadian and Dutch service' on p.139), this aircraft had been damaged on landing at NAS Nowra in New South Wales on 10 August 1951. The aircraft was reduced to produce, with the engine being fitted to VW643 (also in 'Roundel' April 1992, p.45). VX748 was officially struck off RAN-charge on 10 December 1951. F.K. Mason in 'Hawker Aircraft since 1920' states (on p.424) that VX748 had crashed on 4 September 1950.
The Fokker-built aircraft were designated Sea Fury FB.51, with serials 'F-23' to 'F-47' and construction numbers from 6290 to 6314.

*) HMS Nairana was on loan from the Royal Navy in early 1946 and named Hr.Ms. Karel Doorman (QH1) in Royal Netherlands Navy service. In 1948 this ship was replaced by the Colossus Class carrier HMS Venerable which also became Hr.Ms Karel Doorman (R81). The new Doorman was officially commissioned on 28 May 1948. Meanwhile the first Doorman had retured to the Royal Navy in March 1948. From July 1955 until June 1958 the (second) Karel Doorman was adapted for jet operations by the Wilton-Fijenoord ship yards in Schiedam, this included the fitting of an angled flight deck. The MLD Sea Furies made way for the Seahawk FGA.50 in 1957.

Netherlands
The Opleiding Gevechtsvlieger (OGV) or Fighter Pilot School at NAS Valkenburg had been renamed No.4 Squadron in March 1948, operating Fairey Fireflies. From July 1948 the unit made use of four Sea Fury F.50s. The OGV/4 Squadron was responsible for conversion and operational training of MLD Sea Fury pilots. The unit was redesignated No.860 Squadron on 15 July 1950 to become fully operational on the Sea Fury on 24 September 1952. In the meantime the Sea Fury pilots had carried out its initial carrier training along with the Fleet Air Arm during 1951 and 1952 on HMS Indomitable and HMS Illustrious. In early 1953 three MLD Sea Fury pilots were detached to No.807 Squadron, FAA, aboard HMS Ocean on deployment in Korean waters to support UN-operations.
A second outfit, initially intended to act as a reserve and replenishment unit was formed at Valkenburg on 10 March 1953 and became No.3 Squadron. Their Sea Furies were recognisable by the white painted spinner caps, while those on 860 aircraft were orange.

In the years from 1950 to 1956 fifteen Sea Furies were lost in accidents. Currently only one FB.51 is preserved in the Netherlands: '6-43' (c/n 6310) is suspended from the roof in the Nationaal Militair Museum (NMM) at the former Soesterberg Air Base. 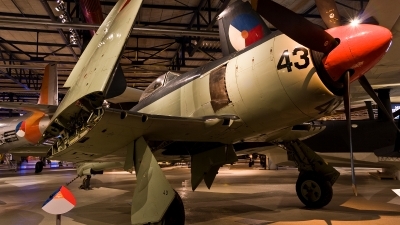 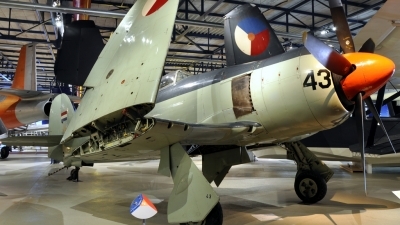 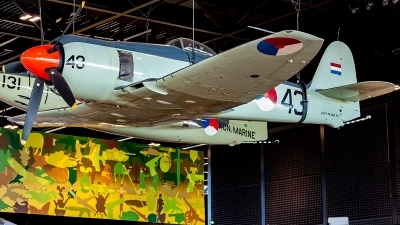