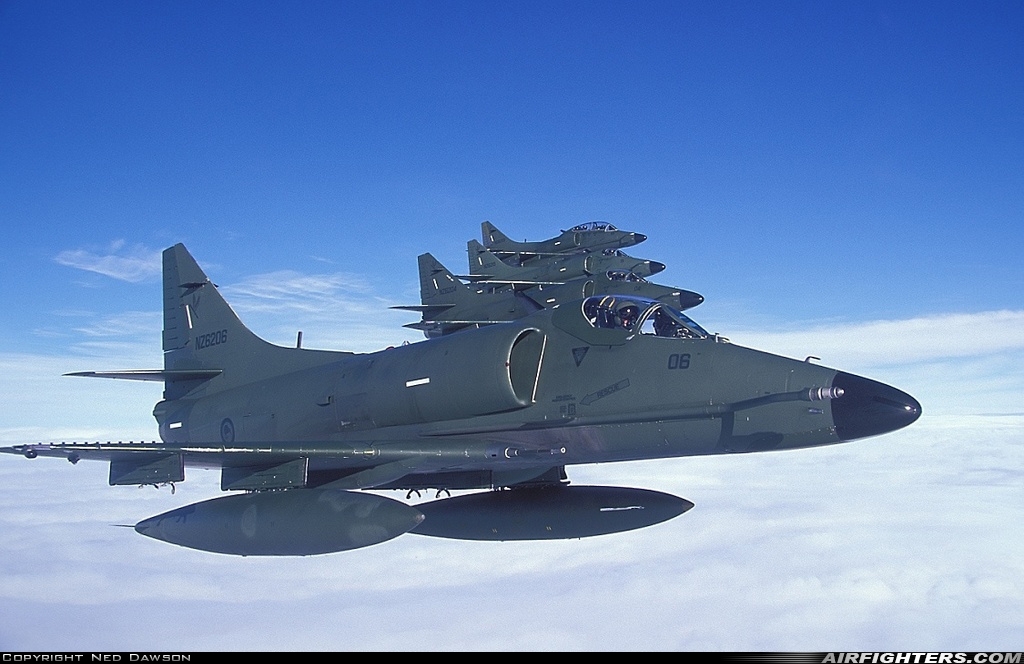 For almost 31 years, the MacDonnell Douglas Skyhawk graced the skies of New Zealand. It could have been a couple of years more had the politicians in the Beehive decided otherwise. Still it must have come as an unwelcome surprise, not only to the RNZAF Skywhak community, that the disbandment of New Zealand's Strike Force was announced in 2000. The RNZAF withdrew the Skyhawks from service from 2001 with the very last flight made in July 2004. The Skyhawks were put into storage at RNZAF Woodbourne near Blenheim.

Back in 1968 an order for ten single seat A-4K and four dual-seat TA-4K aircraft had been placed from the McDonnell Douglas company with delivery scheduled for 1970. The A-4K Skyhawk was derived from the basic A-4F airframe but, with a slightly different avionics package, housed in the 'hump back'. The A-4K design incorporated a drag chute and featured an enlarged fin with squared off tip. The A-4K also had Sidewinder air-to-air missile capability.
The first two aircraft (NZ6201 and NZ6251) were handed over to the New Zealand Ambassador to the US, H.E. Frank Corner, on 16 January 1970 at the McDonnell Douglas aircraft factory in Long Beach, California. The first three RNZAF Skyhawks were delivered to NAS Cecil Field, Florida by pilots from the US Navy's VA-44 on 6 February 1970. At this base , ten RNZAF pilots were undergoing their conversion. On completion of the conversion course, in April 1970, ten RNZAF Skyhawks were flown across USA by RNZAF and US Navy pilots to NAS North Island, San Diego, California. There, the aircraft were loaded aboard the helicopter carrier USS Okinawa. The other four remaining Skyhawks were delivered straight to NAS North Island from the Douglas works.

The USS Okinawa docked in Auckland on 17 May 1970. The aircraft were delivered by road to RNZAF Base Auckland, Whenuapai, and subsequently prepared for flight. On 21 May, S/L John Scrimshaw, CO of No.75 Squadron, flew the first Skyhawk, TA-4K NZ6254, south to her new base at RNZAF Ohakea.
In July 1984 another ten Royal Australian Navy (RAN) Skyhawks were acquired by the RNZAF: eight A-4G single seaters (serials NZ6211- NZ6218) and two TA-4G dual seaters (NZ6255 and NZ6256). These were ferried by RNZAF pilots from NAS Nowra in New South Wales to Ohakea.
These aircraft, together with the remaining original A-4Ks were updated in from 1988 to 1991 under 'Project Kahu' (Kāhu is the Māori-language name for the harrier hawk or swamp harrier) to A-4K-1 standard.
The Kahu update included the installation of a Westinghouse AN/APG-66 radar and weapons aiming systems, ring-laser gyro navigation, hands-on- stick-and-throttle (HOTAS), Ferranti 4510 wide-angle head-up display, and multi-function display glass cockpit. New defensive systems included the General Instruments ALR-66 radar warning receiver and the Tracor ALR-39 chaff and flare dispenser.

Another preserved Skyhawk in RNZAF colours is 'NZ6207' in the Air Force Museum of New Zealand at Wigram. This is actually a former US Navy A-4L (c/n 12841/BuAerNo.149516) It entered service as an A-4C. It represents the first No.75 Squadron machine lost in a flying accident. On 18 October 1974, W/C Fred Kinvig ejected from '07' after suffering an engine oil pump failure. The aircraft crashed near Bulls, not far from her base at Ohakea. The new '07' is on loan from the US Navy and was flown to the then RNZAF Base Wigram on 27 January 1988 in an Air Force Hercules transport. After some cosmetic modifications, such as reconfiguring the nose with underneath pod, modification of the windscreen to the air bleed washer system as on the A-4K, modification to the larger air intakes and tail fin. Two underwing hardpints were added and under the jet exhaust the parachute pack housing was fitted. For yars '07' was on display in the atrium of the museum but has since been relocated to the new display hangar, where she went on display in December 2012.

The cockpit section of the original NZ6207 was recovered and was rebuilt as a (pre-Kahu cockpit) procedure trainer for use with No.2 Squadron from 1985. For the Kahu update project it was used as a mock-up to assist in the final design of the new lay-out. When No.2 Squadron transferred to NAS Nowra in 1991, the NZ6207 cockpit went to RNZAF Woudbourne for ground instruction on ejection seat servicing and procedures. In 2001/2002 it returned to Ohakea were it was modified using scrapped and unserviceable items to represent a Kahu-era cockpit. From 2002 until its closure in 2007, it was on display in the Ohakea Museum at the air base. It has been on display at the Air Force Museum of New Zealand at Wigram since.

Two TA-4Ks have been preserved, with one aircraft returning home to the other side of the Tasman Sea:

Instead of weaponry up to three drop tanks of 370 US Gallons (2,479lbs/ 1.400 litres) could be carried on stations 2, 3 and 4 (centreline and both inboard stations).
Switch to Metric units

New Zealand
The Royal New Zealand Air Force was the sole military operator of the A-4K Skyhawk. The aircraft were based at RNZAF Ohakea with No.75 Squadron.

No.2 Squadron reformed in December 1984, also at Ohakea, to be equipped with the ex-RAN A-4G and TA-4G Skyhawks. The squadron provided pilot conversion and operational training, and was tasked for reconnaissance, systems evaluation, and procedures development. From the middle of 1988 the unit received the first updated Kahu Skyhawks for test flight trials. In February 1991 No. 2 Squadron was relocated to HMAS Albatross (NAS Nowra) in New South Wales, Australia with the updated A-4K Kahu Skyhawks to provide the Australian Navy with Air Defence Support, participating in exercises with RAN warships. The squadron was equipped with two A-4K and four TA-4K aircraft supported by 50 to 60 personnel. No. 2 Squadron continued to provide air defence training to the ADF until disbandment of the New Zealand Strike Force in November 2001.

In 2012 eight of the mothballed Skyhawks at Woodbourne were sold to Draken International LLC at Lakeland Linder IAP in Florida. They were all registered on 1 March 2013:

On 18 August 2016 N140EM crashed on approach to Nellis Air Force Base, Las Vegas, USA. The pilot (sole occupant) ejected with minor injuries. The aircraft was destroyed. 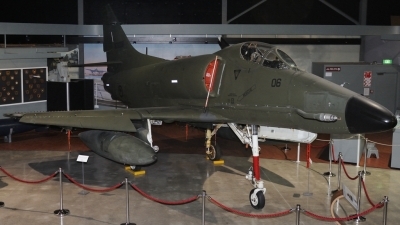 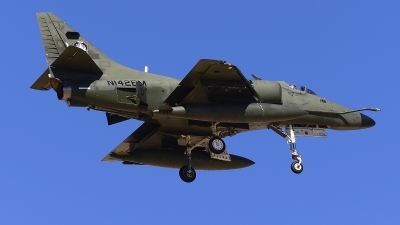 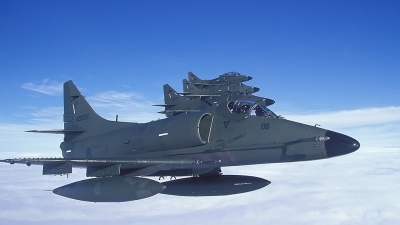 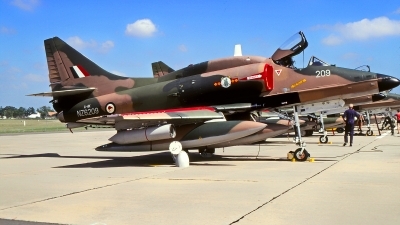 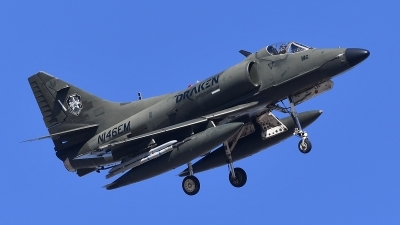 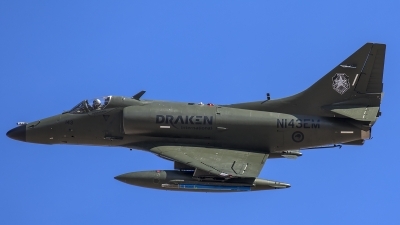